• Vice President Kamala Harris and House Speaker Nancy Pelosi - sat behind the president during his annual address to the nation. 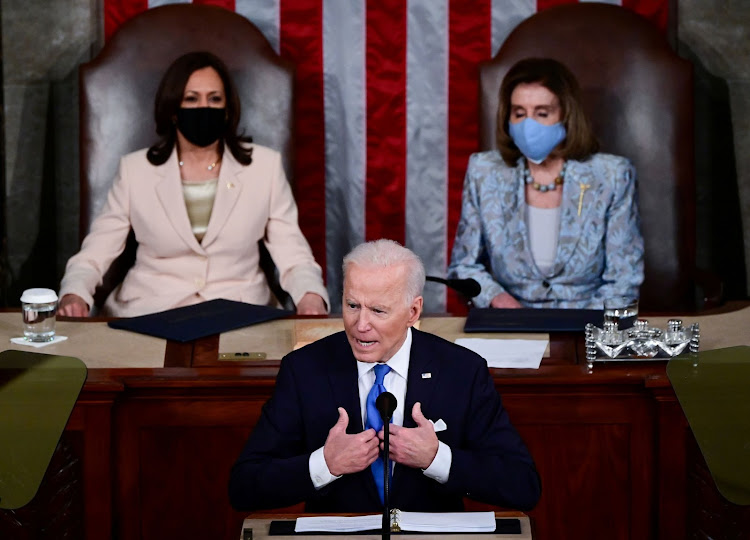 U.S. Vice president Kamala Harris and Speaker of the House Nancy Pelosi listen as U.S. President Joe Biden addresses to a joint session of Congress in the House chamber of the U.S. Capitol in Washington, U.S., April 28, 2021.
Image: REUTERS

History was made at the U.S. Capitol on Wednesday night when two women - Vice President Kamala Harris and House Speaker Nancy Pelosi - sat behind the president during his annual address to the nation.

Prabal Gurung, who designed Harris's off-white suit, seized the moment, announcing on Twitter that Harris was wearing a "Hand Tailored Double Crepe Cream Suit and Ivory Silk Charmeuse Camisole," which was "made in New York City, at the Prabal Gurung Atelier, and designed for power moments in history."

Harris, the child of immigrants from India and Jamaica, wore the suit by Gurung, an immigrant from Nepal who was born in Singapore, to listen to a speech in which President Joe Biden appealed for a shift in immigration policy.

Meanwhile, in a balcony overlooking the House of Representatives chamber, first lady Jill Biden was making a fashion statement of her own.

She wore a dress by another immigrant designer, Uruguayan-born Gabriela Hearst, which was hand-embroidered with the flowers of all 50 states, Washington, D.C., and every U.S. territory.

The navy dress was a different version of a cream coat and dress designed by Hearst, also embroidered with state and territories' flowers, that Biden wore on Jan. 20 for celebrations of her husband's inauguration.

Hearst said on her website "the message of unity" was her main inspiration for adorning the dresses with state flowers. "The Delaware flower is positioned at the heart level of The First Lady, from there, all the other flowers branch out," the website says about the inaugural outfit, a nod to the Biden's home state.

The president wore a dark suit with a blue tie, designer unknown, for his address to lawmakers at the U.S. Capitol. Harris's husband, Douglas Emhoff, who is referred to as the Second Gentleman by the White House, wore grey.