• Airlines around the world have been severely hit by the coronavirus pandemic, with website Flightradar24 reporting that the number of flights last year were down almost 42% from 2019.

• The measures could affect travel between Paris and cities including Nantes, Lyon and Bordeaux. 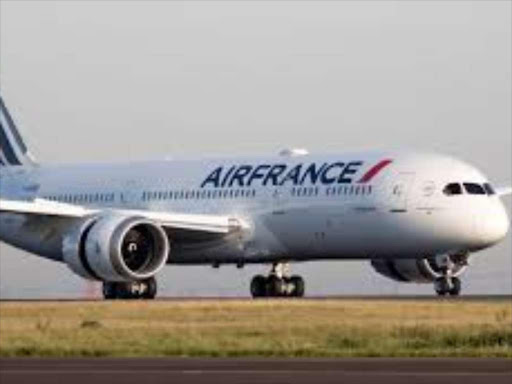 French lawmakers have moved to ban short-haul internal flights where train alternatives exist, in a bid to reduce carbon emissions.

Over the weekend, lawmakers voted in favour of a bill to end routes where the same journey could be made by train in under two-and-a-half hours.

Connecting flights will not be affected, however.

The planned measures will face a further vote in the Senate before becoming law.

Airlines around the world have been severely hit by the coronavirus pandemic, with website Flightradar24 reporting that the number of flights last year were down almost 42% from 2019.

The measures could affect travel between Paris and cities including Nantes, Lyon and Bordeaux.

The French government had faced calls to introduce even stricter rules.

France's Citizens' Convention on Climate, which was created by President Emmanuel Macron in 2019 and included 150 members of the public, had proposed scrapping plane journeys where train journeys of under four hours existed.

But this was reduced to two-and-a-half hours after objections from some regions, and the airline Air France-KLM.

Francois Pupponi, a member of the French National Assembly, also told Reuters news agency that the plan was "not the right one".

"The environmental choice must take precedence, but let's not abandon the social and economic choices around industry and around airports - the two are complementary," he said.

"On average, the plane emits 77 times more CO2 per passenger than the train on these routes, even though the train is cheaper and the time lost is limited to 40 minutes," it said.

It also called for "safeguards that [French national railway] SNCF will not seize the opportunity to artificially inflate its prices or degrade the quality of rail service".

Saturday's vote came days after the French government more than doubled its stake in Air France. The government had previously offered €7bn ($8.3bn, £6bn) in loans to help the airline weather the pandemic, although France's economy minister said at the time the funding was dependent on the airline scrapping some of its domestic flights.

This is not the first time similar measures have been introduced.

Last year, Austrian Airlines replaced a flight route between the capital Vienna and the city of Salzburg with an increased train service, after receiving a government bailout with provisions to cut its carbon footprint.