• Police then visited him to tell him to stop, as authorities tried to keep the news under wraps. 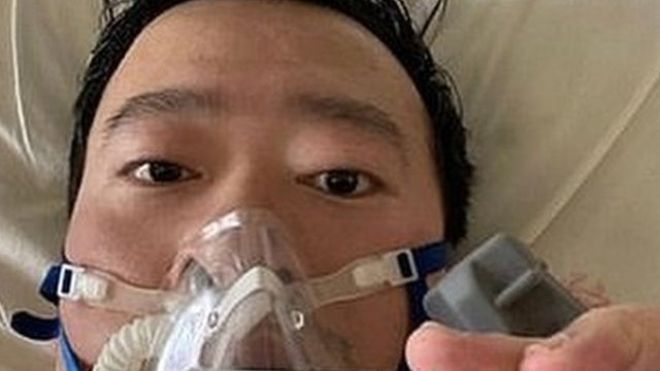 Dr Li posted a picture of himself on social media from his hospital bed.
Image: BBC

A Chinese doctor who tried to issue the first warnings about the deadly coronavirus outbreak has died of the infection, Chinese media say.

Li Wenliang was working as an ophthalmologist at Wuhan Central Hospital when he sent out a warning to fellow medics on December 30.

Police then visited him to tell him to stop, as authorities tried to keep the news under wraps.

The coronavirus causes severe acute respiratory infection and symptoms usually start with a fever, followed by a dry cough. Most people infected are likely to fully recover - just as they would from a flu.

What is Li Wenliang's story?

The ophthalmologist posted his story on the Weibo site from a hospital bed a month after sending out his initial warning.

Dr Li, 34, had noticed seven cases of a virus that he thought looked like Sars - the virus that led to a global epidemic in 2003.

On 30 December he sent a message to fellow doctors in a chat group warning them to wear protective clothing to avoid infection.

Four days later he was summoned to the Public Security Bureau where he was told to sign a letter. In the letter he was accused of "making false comments" that had "severely disturbed the social order".

In his Weibo post he describes how on 10 January he started coughing, the next day he had a fever and two days later he was in hospital. He was diagnosed with the coronavirus on 30 January.

A number of posts on Chinese social media sites have expressed grief over his death.

What is the latest on the virus in China?

China is introducing more restrictive measures to try to control the outbreak.

Beijing has banned group dining for events such as birthdays and weddings while cities such as Hangzhou and Nanchang are limiting how many family members can leave home each day.