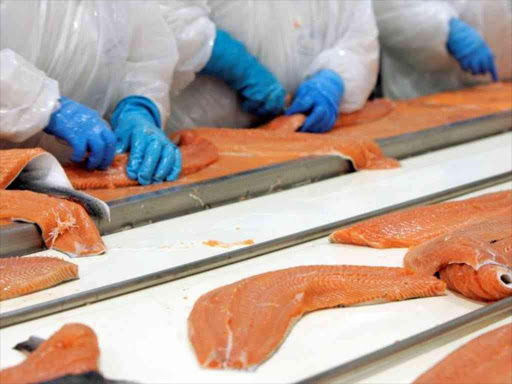 Salmon in supermarkets across the US and the UK may contain banned toxic chemicals linked with developmental problems in children, a new study warns.

While we are all encouraged to eat wild-caught fish, many end up with farmed produce - and some stores have even been accused of putting 'wild' labels on farmed fish.

As a result, since 2004 the US and most of Europe have been working to eliminate a certain chemical called PDBE from all waters - of both farmed and wild fish - because they can disrupt hormones and cause developmental effects in the people who consume them.

However, a new study by the University of Pittsburgh has found evidence of PBDEs in food fed to farmed salmon - even in those in supposedly PBDE-free environments.

The chemicals were detected at such high concentrations that lead author Dr Carla Ng warns it could be reaching our plates.

"The international food trade system is becoming increasingly global in nature and this applies to animal feed as well," Dr Ng said.

"Fish farming operations may import their feed or feed ingredients from a number of countries, including those without advanced food safety regulations."

Dr Carla Ng, assistant professor of civil and environmental engineering at the University of Pittsburgh's Swanson School of Engineering, said: "The United States and much of Europe banned several PBDEs in 2004 because of environmental and public health concerns.

"PBDEs can act as endocrine disruptors and cause developmental effects. Children are particularly vulnerable."

Restrictions were placed on PDBEs in 2004.

But, despite restrictions on their use, PBDEs were classed as 'persistent organic pollutants' at the Stockholm Convention, an international environmental treaty, in 2009.

Dr Ng's paper said they continue to be found in areas that process large amounts of electronic waste and with poor recycling regulation such as China, Thailand and Vietnam.

As a result, salmon grown in environments free of polybrominated diphenyl ethers (PBDEs) could still contain dangerous amounts of the chemical as a result, according to the findings.

Her paper, which presented new models on how the chemical enters food chains, shows it could also affect feed for cattle and sheep as well.

But Dr Ng's model takes into account factors to find 'the best predictor' of PBDEs in farmed salmon.

She said: "We found that feed is relatively less important in areas that already have high concentrations of pollutants in the environment.

"However, in otherwise clean and well-regulated environments, contaminated feed can be thousands of times more significant than the location of the farm for determining the PBDE content of salmon fillets."

She added the model could be applied in other fish with large global markets such as tilapia or red snapper and to predict pollutant content in livestock or feeds produced in contamination "hot spots".

She added: "Hot spots are places identified as having high levels of pollutants

"As these chemicals circulate through the environment, much ends up in the ocean. It's extremely important to pay attention to the sourcing of ocean commodities and areas where pollutant concentrations are particularly high."

She hopes her model will help create better "contamination control strategies" such as substituting fish oils for plant-based materials or decontaminating fish oil before human consumption.