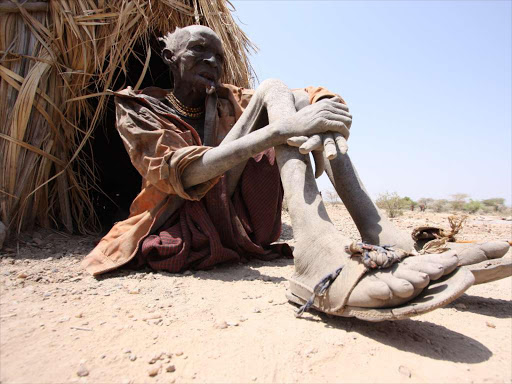 Kaler Ureyeng beside his Manyatta in Lomerliku village of Turkana south waiting for relief food. FILE

Over 7 million people in South Sudan could become severely food insecure in coming months unless aid is urgently stepped, the United Nations has warned.

Many who are on the brink of starvation are surviving on weeds and water lilies.

The crisis has been fuelled by conflict that broke out in the country in 2013.

Conflict in South Sudan has been going on for quite a long time and the last spike was in 2014 but still we're getting about 1,000 people every month.

When fighting broke out in Betiu, South Sudan in 2016, Nyadane Kuony and his grandparents fled to seek shelter in Ayod County, in the oil-rich area of Jonglei State.

The four-year-old's father has died before she was born and her mother has travelled leaving her in the care of her grandparents.

Though they have found relative safety here, the family like thousands of people in the country now find themselves caught up in famine.

They have nothing to eat and have been forced to survive on weeds and water lilies instead.

Kuony is now suffering from malnutrition as a result.

The World Food Programme (WFP) has warned that without assistance, as of May this year, more than 1.3 million children under five will be at risk of acute malnutrition.

Agencies say South Sudan is close to another famine, after more than four years of civil war and failed ceasefires in the world's youngest nation.

They warn that more people could be pushed into severe hunger and famine-like conditions during May-July unless assistance and access to people who need aid are maintained.

The report comes one year after famine was declared in parts of South Sudan in February 2017.

"I come here to eat these reeds because we don't have food," said Mine Pusk Luoch, a child who was eating reeds with his friends in Ayod.

The disaster is largely man-made. Oil-rich South Sudan, plunged into civil war in 2013, after President Salva Kiir fired his deputy Riek Machar. Since then, fighting has fractured the country along ethnic lines, inflation has sharply increased and war and drought have paralyzed agriculture.

Prolonged dry spells, flooding and continued pest infestation, such as Fall Armyworm, have also had a damaging impact.

Almost two-thirds of the population will need food aid this year to stave off starvation and malnutrition as aid groups prepare for the "toughest year on record", according to South Sudanese and UN officials.

About 4 million South Sudanese have been forced to flee their homes. Nearly 1.9 million are internally displaced and about 2.1 million have fled to neighbouring countries.

from South Sudan. More families continue to arrive in the country today.

World Food Programme (WFP) provides the new arrivals with meals while they stay at the reception centre.

"Conflict in South Sudan has been going on for quite a long time and the last spike was in 2014 but still we're getting about 1,000 people every month. When they arrive here the World Food Programme is giving them a hot meal before they get allocated a piece of land where they continue receiving food rations as well as cash transfers from the World Food Programme," said Martin Karimi, the WFP

At the peak of its response this year, WFP aims to reach 4.4 million people with life-saving food and nutrition assistance. The agency plans to pre-position 140,000 metric tons of food and nutrition supplies - 20 percent more than in 2017 - in more than 50 locations across the country.