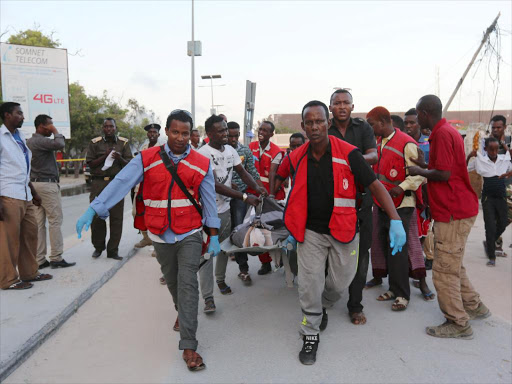 Rescue personnel carry the body of a man killed at the scene of a blast near the Mogadishu sea port in Mogadishu, Somalia, May 24, 2017. /REUTERS

A bombing claimed by al Shabaab militants killed five civilians and injured six more in the Somali capital on Wednesday, a spokesman for the city's mayor said, underscoring the militants' ability to carry out attacks despite territorial losses.

Bombings are a near-daily occurrence in Mogadishu. Most are claimed by the al Qaeda-linked al Shabaab militia, which is fighting to overthrow the weak UN-backed government and drive out the African Union peacekeeping force that supports it.

"We have confirmed that five civilians, including a mother and her son, have died," said Abdifatah Omar Halane, spokesman for the Mogadishu mayor.

A Reuters reporter at the scene saw burnt bodies and a wrecked car near a damaged police checkpoint.

A spokesman for al Shabaab's military operations said one of the group's fighters was killed in the incident.

"One mujahid (fighter) was martyred after he targeted security officials with his car bomb," said the spokesman, Sheikh Abdiasis Abu Musab.

Since withdrawing from Mogadishu in 2011, al Shabaab has lost control of most of Somalia's cities and towns. But it still retains a strong presence in swathes of the south and centre.

Also on Wednesday, eight Kenyan security officers were killed on the Kenyan side of the Somali border in two separate roadside bombings. Al Shabaab claimed responsibility for the first attack but could not be reached for comment on the second.

Adding to the violence, a small jihadist group in the north of Somalia has split from the main insurgency and declared allegiance to Islamic State. That group claimed responsibility for a bombing in the northern city of Bosasso that killed five people on Tuesday.

Somalia has been mired in civil war since 1991. It is also suffering from a regional drought that threatens to tip its population of 12 million into famine.