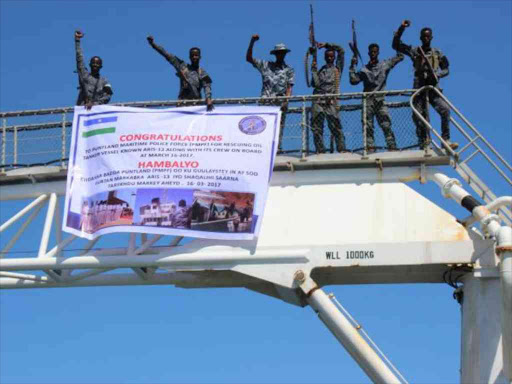 Maritime police are seen aboard oil tanker Aris-13, which was released by pirates, as it sails to dock on the shores of the Gulf of Aden in the city of Bosasso, northern Somalia's semi-autonomous region of Puntland, March 19, 2017. /REUTERS

The recent of an oil tanker by alleged Somali pirates raises a number of important questions. The MT Aris 13 was the first commercial vessel to be hijacked since 2012. For the international community, the question is whether this represents a new spectre of piracy on the horizon.

The attack also raises serious doubt over the long-term effectiveness of current counter-piracy measures. Billions of dollars have been spent on eradicating the menace. Anti-piracy organisation Oceans Beyond Piracy analysis suggests that in 2012 alone about was spent on mitigating pirate activity around Somalia.

There’s little indication of an imminent large-scale return to piracy off the Somali coast. But there’s no ruling out the possibility of more frequent attacks in the future. The real danger is that, should piracy gain a footing again, the pirates will have considerable skill and expertise to draw on.

What prospective pirate gangs cannot count on is the support of the local communities. This isn’t a recent revelation. Strides have been made in this direction by various members of the international community. The aim has been to increase local capacity to provide an alternative to the economic benefits that piracy brings. Increasing capacity both in the of pirates and criminals at sea has strengthened the maritime law enforcement authorities through the construction of the Bosasso Port Police headquarters in Puntland – the region where the Aris 13 was held.

The recent attack demonstrates exactly why the international community needs to pursue this line of defence more aggressively and why it cannot afford to take its foot off the pedal.

Pirates waiting in the wings

Numerous pirates are serving out prison sentences – in as well as abroad. And there are many more waiting to seize any opportunity to .

This pool of pirate talent will have already considerable expertise to draw on, having already acquired their sea-legs and seafaring knowledge. There’s no shortage of people familiar with the process and routine of pirate attacks.

Piracy expert and scholar Christian Bueger correctly that maritime piracy will endure if there are actors prepared to “” in pirate operations. Somali pirates have already demonstrated their tenacity and ability to develop sophisticated and effective .

These people have become more skilled at conducting piratical activities than the piracy emerging in the early 2000s. This because the conditions in Somalia and the region have afforded them the opportunity to engage in other forms of maritime crime.

These criminal pursuits include smuggling contraband such as . Pirates did not necessarily leave the waters, they just rebranded themselves while diversifying their criminal practices.

Not only do prospective Somali pirates have greater know-how to draw on, the increasing number of weapons arriving on Somali shores could also play into the waiting hands of would-be pirates. There’s even the that the guns are ferried in the return-load of smugglers trafficking people to Yemen.

Once arrived, suggest these firearms are finding their ways towards coastal towns as the supply pushes down the cost of acquiring weapons. Experts for example that the street value of a Soviet designed PKM machine gun dropped to USD$4,500 from $13,000 in late 2016.

Underlying causes need to be addressed

Counter-measures against piracy have traditionally focused on the private security coupled with an extensive and intensive naval campaigns. At the height of this campaign, Security Council gave vessels engaged in combating piracy a green light to enter Somali waters to repress piracy.

But naval engagements were scaled back increasingly after the decline of piracy in 2012. The recent attack suggests that these measures did little more than provide a “band-aid” to the problem. This is because the underlying and the conditions that initially facilitated piracy .

Onshore conditions of economic dislocation, poverty as a result of the demise of the state, coupled with narratives of illegal fishing have long been touted as the root causes sparking the outbreak of piracy. Indeed, illegal fishing remains rampant and the response of the international community has been minimal in contrast to anti-piracy efforts.

Instead, naval expeditions have focused on the pirate menace, while other causes attract far less attention. Yet, community engagement provides a critical tool. Community and regional responses should draw on such initiatives as the African Union’s , and initiatives devised by IGOs like the . Both outline a comprehensive plan to improve governance, infrastructure which will address both piracy and wider forms of maritime crime. These initiatives are vital and provide a sustainable and long-term solution, rather than a reliance on naval strength in the Indian Ocean.

Fostering local capacity through greater maritime law enforcement and strengthening legal infrastructure arguably offers the best solution. Bolstering marine law enforcement not only affords the community the ability to address piracy but also to other forms of maritime crime, such as illegal fishing. Indeed, the release of the Aris 13 was initiated by the Puntland Maritime Police Force intervening and engaging the pirates in a gunfight that saw the

The push to combat piracy has sprung from the local community. The MT Aris 13 was released after only and allegedly . The Somali community therefore has the capacity to turn the pirates away from the quarry empty handed. This despite millions of dollars in ransom payments at stake.

Any relapse of piracy is likely to foster an even more dangerous brand of hijackings on Somali waters. It’s therefore an opportune time to address piracy once and for all.