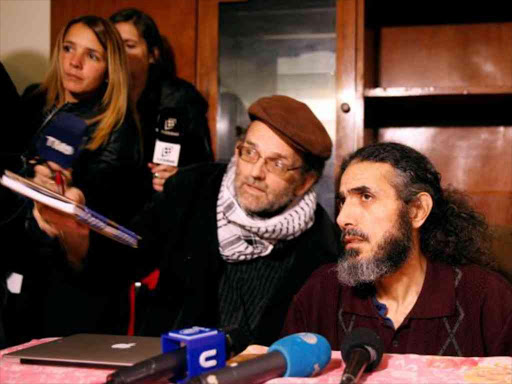 Uruguay on Friday urged a former

prisoner demanding to be reunited with his family to end a two-month-old hunger strike and said it was trying to transfer him to another country.

Jihad Diyab, a Syrian national, was held for 12 years in the US military prison at

Bay, Cuba, without being charged and was released along with five other prisoners to Uruguay in 2014 to reduce the number of detainees.

"We are calling on him to abandon his hunger strike and continue looking for a better future for him and his family," Uruguay's foreign minister, Rodolfo Nin Novoa, said at a news conference.

"So far we have received negative responses" on the transfer, he added.

Diyab was held briefly by Venezuela's intelligence agency after arriving in Caracas in July. While there a lawyer said he asked the Uruguayan consulate to help him travel to Turkey, where he wanted to meet his family.

On Aug. 30 he was deported back to Uruguay, where he had not been seen since mid-June. Uruguayan officials said Diyab had traveled through Brazil and Venezuela unauthorized.

prisoners, arguing that they represented a security risk to Americans.

On Friday, Alejandra de Bittencourt, the spokeswoman for a rights groups supporting Diyab, said, "His health is delicate as it has been nearly 60 days of strike, but he is conscious."

She said she hoped the Uruguayan government would write formal letters allowing Diyab to travel abroad.

Post a comment
WATCH: The latest news from around the World
by REUTERS
World
08 October 2016 - 15:00
Read The E-Paper