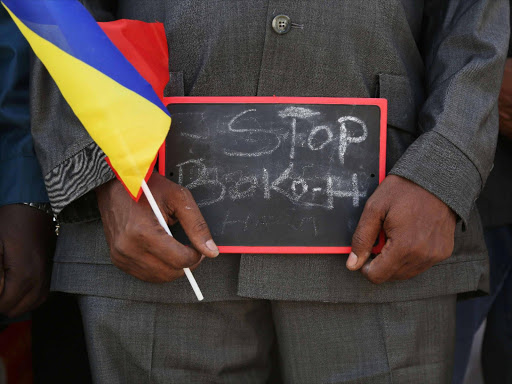 A man holds a sign that reads "Stop Boko Haram" at a rally to support Chadian troops heading to Cameroon to fight Boko Haram, in Ndjamena January 17, 2015. Photo/REUTERS

Nigerian city of Maiduguri, the heart of a seven-year-old insurgency by Boko Haram militants, a military spokesman said.

The attack, which also wounded 18 people, occurred during morning prayers in the village of Ummarari, six km (four miles) from the centre of the capital of Borno state in Africa's most populous country and biggest energy producer.

It was the first such assault in the northeast since early February, when two suicide bombers - also women - blew themselves up at a camp for internally displaced people in Dikwa, 85 km (50 miles) from Maiduguri..

"Sadly, 22 people were killed and 18 others sustained various degrees of injuries ... The first attack targeted a mosque, while the second blast was about 50 metres away, a few minutes later," said military spokesman Colonel Sani Usman.

There was no immediate claim of responsibility for the attack, the first in Maiduguri since 65 people were killed in January, but it resembled others by Boko Haram in its campaign to carve out an Islamic state in the region.

"One of the two female bombers, disguised as a male worshipper, joined other Muslim brothers in the mosque at Ummarari-Molai during ... prayers," said Malum Farouk, a member of a grassroots security group in a civilian joint task force.