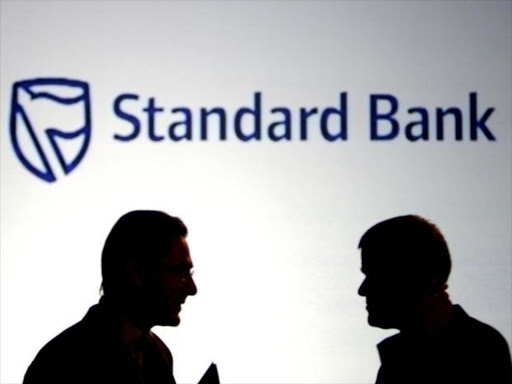 Businessmen chat in front of a Standard Bank logo in a file photo. Photo/REUTERS

and inequality are a drag on

Africa's most advanced economy, the head of Standard Bank, one

CEO Sim Tshabalala's comments in a note to his staff follow the suspension of white Standard Bank economist Chris Hart, who last week tweeted about "a sense of entitlement and hatred towards minorities".

The tweet prompted mostly black youths to stage a protest march to the bank's offices in downtown Johannesburg.

Africans are in fact fully entitled to a decent quality of life and to redress for apartheid,"

Tshabalala said in the note published on the Rand Daily Mail's website.

Africa's annual economic growth has languished below 2 per cent for the past five years in a downturn resulting mainly from poor governance, raising racial tensions that have played out on social media since the start of the year.

Africans have been fired from their jobs this week for using racial slurs in public, according to local media reports.

"However, each of these sources of competitive advantage is badly eroded by incomplete transformation and by

Africans on issues such as affirmative action, said it would raise funds for the four defendants and pay their legal fees.

Post a comment
WATCH: The latest news from around the World
by REUTERS
World
14 January 2016 - 18:00
Read The E-Paper