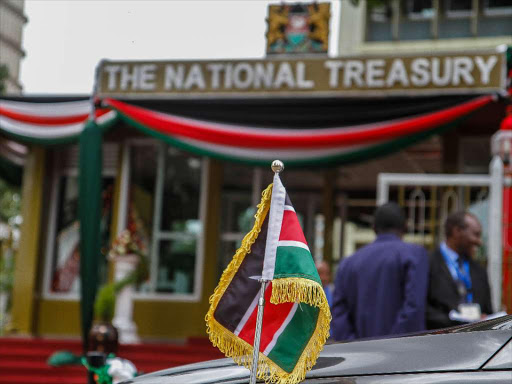 Kenya is weighed down by and faces the possibility of a debt crisis (where the government can’t repay what it owes).

Kenya’s current public debt stands at approximately 4.884 trillion Kenyan shillings (USD$49 billion) . This is up from 42.8% in 2008. In other words, the country owes more than half the value of its economic output (GDP).

The International Monetary Fund recommends that ratios of public debt to GDP should for developing countries.

Unsustainable debt levels can be harmful. They can “crowd out” development and social programmes because huge portions of government revenue are taken away from essential services and used instead to service debt. In the worst case scenario, Kenya might be forced to cede control of its strategic national assets to foreign creditors. This has happened in some countries such as which had to hand over a strategic port to China.

The concern is not just about the amount of debt relative to national income, but where the debt comes from. that as at March 2018, more than half (USD$24.9 billion) of Kenya’s total public debt came from outside the country, up from USD$21.6 billion a year before.

External debt is not necessarily harmful for an economy. that external debt inflows (if synchronised with business cycles) can stabilise the economy and boost economic growth. However, interest and principal repayments on external debt are made in foreign currency. This depletes a country’s foreign exchange reserves and may devalue the domestic currency.

In the short term, a weak domestic currency makes a country’s exports more competitive. That’s good. But a weak currency can lead to high inflation rates in the long term because it costs the country more to import what it needs for production and consumption.

Kenya’s increasing appetite for international privately held debt is worrying. Debt is said to be privately held if the lenders are non-governmental institutions and individuals.

The country has recently issued two debt instruments (bonds), first in 2014, and then in 2018. The bonds were made available on the international debt market. In each case, Kenya raised (borrowed) approximately USD$2 billion.

According to the Treasury, the money was to be

applied towards the government’s development initiatives and .

This means that proceeds from debt were not earmarked for specific capital projects and that some of it were to be spent on servicing existing debts. Common sense should tell us that this is financially unsound.

Borrowed funds should be put to productive use. Investing them in improving public infrastructure would lower the cost of doing business and make a country an attractive investment destination. This in turn would bolster economic output, and therefore its ability to service the debt and, in the long run, lessen the need for additional debt.

The overall effect would be to improve the country’s credit rating, which in turn would make it a safer bet should it seek more debt in future.

But if a country uses the money it has borrowed to repay another debt, no new wealth is created, and it might struggle to repay debt in future. This is likely to cause its credit rating to fall. Lenders and investors would then demand a higher interest rate to compensate for the risk that they will lose their money. This makes it costlier to repay the new debt.

Kenya’s experience with its two , the latest one issued in two equal tranches – one repayable after 10 years, and the other after 30 years – showed that the country is expected to pay more for the second issuance compared to the first. This is because the risk of lenders losing their money was higher for the second issuance.

Aside from the individual risk characteristics of particular countries, research shows that countries on the African continent borrowing on the international markets routinely pay an “” estimated at about 2.9 percentage points on their sovereign debt. Thus, by resorting to the international debt market, Kenyans are paying dearly.

Similar to Eurobonds, bilateral debt agreements are also believed to cost Kenya a lot more than their explicit interest charge. Take the case of China, for example. China is Kenya’s , holding about 72% of the country’s bilateral debt as of March 2017. Studies show that Kenya’s Chinese debt because the loan agreements are not transparent, projects are not well prioritised, accounting procedures are weak and it’s not clear what projects are costing.

On top of this, most Chinese loans are conditional on Kenya’s acceptance of Chinese contractors. This limits the loans’ developmental impact through potential technology transfers which could improve the country’s productive capabilities and in turn its future ability to comfortably absorb the debt burden.

What Kenya needs to do about its debt

To reduce its burgeoning public debt burden, Kenya must improve its production capabilities in the long term. This can be achieved in several ways.

Firstly, it must increase its investment in human capital to promote entrepreneurial activity. Thus, the current focus on vocational and technical training must be sustained. Secondly, there must be shift from exporting raw materials to value addition and manufacturing. And lastly, attention should be directed to developing local enterprise especially those that produce import substitutes. In the agricultural sector, sugar and rice are two examples.

In the short term, measures must be put in place to reduce government spending and to enhance revenue collection.