Evictions in Nairobi: Why the city has a problem and what can be done 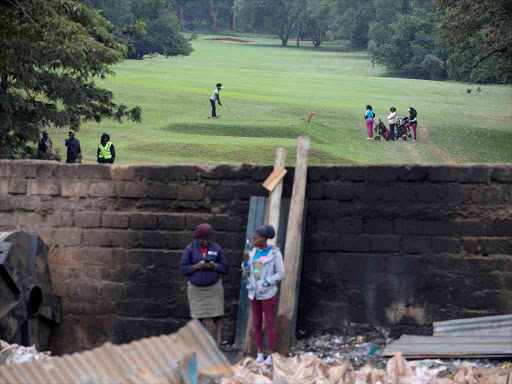 A golfer tees in the background as Kenyans watch bulldozers demolishing dozens of houses to make way for a new road in Kibera slum, Nairobi, July 23, 2018. /REUTERS

A new road in Nairobi, Kenya, is displace up to 30,000 Kibera slum residents. The bulldozers moved in the early hours of the morning as authorities pressed ahead with a controversial decision to force people out. Kefa Otiso explains why forced evictions are so prevalent in Nairobi, and what can be done to prevent them.

Why do forced evictions happen in Nairobi?

They happen for lots of reasons. But the mains ones are ambitious development plans, the of land, an acute of affordable housing, and a lack of land rights.

Evictions happen when people fail to pay loans or rent, or when they illegally occupy public or private land. They also result from land ownership disputes – though some of these are criminally engineered through irregular or corrupt land deals.

But probably the most visible cases of forced eviction happen when the government reclaims land for public uses like road construction. This problem is not unique to Nairobi; in many other African cities.

The exact number of evictions in Nairobi isn’t known. But they’re quite common in the city as in the press. They shouldn’t be so prevalent. The 2010 constitution individual rights, and should reduce incidents of forced evictions in the city. But poor citizen awareness, high legal costs, a history of unequal land access, poor planning, high levels of corruption and inefficient land markets all mean that evictions keep happening.

Are all the evictions legal?

No. Some are legal, others are illegal.

Legal evictions use warnings and court orders to enforce the decision, which is carried out by armed police and bulldozers. In the cases of illegal evictions, especially those involving corrupt land deals, such niceties are a luxury. Evictions have to happen in the middle of the night, carried out by hired thugs, often with wanton destruction of property and attacks on the occupants.

These types of forceful evictions, whether legal or illegal, are typical in the city’s slum areas. They unannounced in morning raids, when residents are either asleep or at work and are therefore less likely to resist. The also happened in the early hours of the morning.

What impact do they have?

By forcing people out of their homes and denying them their right to due legal process, forced evictions exact a huge negative impact on people’s socioeconomic welfare. They often lose their belongings and potential livelihoods without compensation, and don’t have any other place to live.

Forced evictions also undermine local and national development by destroying accumulated social and economic networks and property. Thus, displaced people often have to start and rebuild their lives from scratch in new locations.

What is the government failing to do?

Kenya is still dealing with the lingering effects of nearly 70 years of British colonial rule which laid the foundation of many of Nairobi’s ongoing social and economic problems, including forced evictions.

The colonial government purposely under-invested in housing for indigenous Kenyans by claiming that Africans were best suited for rural life. In reality, this was a ploy to ensure adequate supply of cheap African labour to European commercial farms in Kenya’s former “White Highlands.”

Moreover, the colonial government restricted African access to Nairobi and implemented other race-based policies which prioritised European and Asian access to the city’s land and other economic resources. As a result the majority of the African population settled in unsafe areas. These became the precursor of many modern slum and squatter settlements that are vulnerable to forced evictions.

While independence legally changed many of these policies, their legacy still remains – not least because the city’s postcolonial governments have retained many of the colonial era’s urban management tools, including forced evictions.

These policies undermined African investment in their settlements because they came to see the city as a temporary place to live. Other African communities, like the Nubian population, recruited from Sudan by the British army for the Africa Rifles regiment, were purposefully settled on public land – which comprises part of . But because neither the British nor independent Kenya gave the Nubians a title deed for the land until 2017, and even then for a small portion of the original land, the Nubians continue to remain stateless and landless for much of their history in Nairobi.

Consequently, they have long been unable to develop their area or stop the growth of the slum that now surrounds them. They, and other Kibera residents, have as a result endured .

Today, Nairobi is in many ways still a city that has an elitist orientation that mostly benefits its relatively small middle and upper class elites. While these elites often live in gated estates, the city’s population is concentrated in cramped slum and squatter settlements that lack even basic services and utilities.

Are there lessons that can be learnt from other countries?

Yes, there are many.

First, Kenya needs to complete the creation of its national registry. This will increase transparency and efficiency of the city’s land market, decrease corrupt land deals and reduce forced evictions by lowering the number of land disputes.

Second, more needs to be done to make the 2010 Constitution a reality. For instance, citizens need to be better informed of their rights and responsibilities.

Third, recreate Kenya’s municipal governments which, under the 2010 Constitution, were replaced by County Governments. The municipal structure was similar to the US’s system for running urban areas and is potentially more effective at managing the country’s urban areas and creating more housing.

Fourth, make more use of the urban planning and management experience of international actors – like the United Nations Human Settlements Programme, which is fortuitously headquartered in Nairobi.