What Kenya needs to do to stop university strike cycle 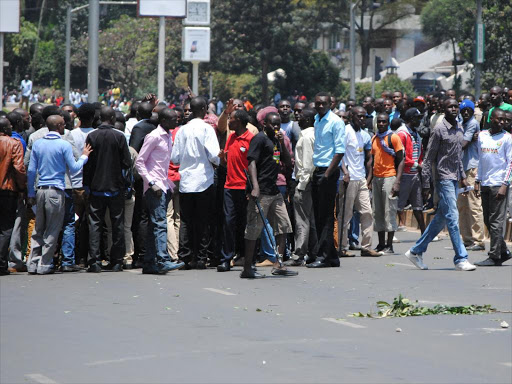 University of Nairobi students at the University Way roundabout during a demonstration on September 19, 2014. /PATRICK VIDIJA

Kenya’s public university lecturers are on strike, barely three months after another . Ishmael Munene spoke to Moina Spooner from The Conversation Africa about why the strike is happening and what can be done to stop the cycle.

What are the demands of the lecturers from public universities?

Academic staff from Kenya’s public universities have been on strike for over a month now. The issue: an agreement which covers salaries and benefits for 2017-2021 meant to have been negotiated, replacing the expired 2013-2017 agreement.

This new Collective Bargaining Agreement is between the University Academic Staff Union and the Inter-Public Universities Councils’ Consultative Forum, which negotiates on behalf of the state.

Since then, the Inter-Public Universities Councils’ Consultative Forum has promised to table its own counter offer four times but has failed to do so. The negotiations should finalised on 31 May 2017 so that implementation could begin in July 2017.

This has resulted in strikes. The most recent one ended in December after both parties to conclude negotiations by 28 February 2018.

In view of the continued failure by the government to meet its end of the bargain, lecturers have rightly concluded that the state to negotiate in good faith.

To what extent do these demands address the most pressing challenges facing public universities?

Staff wages are a huge challenge facing Kenya’s public universities. But they’re not the only one.

University worker salaries, unlike those of other public sector workers such as , have not kept pace with inflation or remuneration. This leads to brain drain from Kenya’s public higher education institutions. in critical disciplines is a persistent problem. For instance, between 2004 and 2007, Moi University departures 31% in law, 18% in information sciences and 14% for business and economics.

And now, due to deep shrinking revenues and an expensive budget, Kenya is budgetary allocations to various sectors. That includes universities. In public university funding for capital assets was reduced by Ksh 6.7 billion (USD$ 67,000,000). Research allocation went down by Ksh 454 million (USD$ 4,540,000). These cuts put a strain on the maintenance and development of facilities, as well as on the production of academic research.

This financial crisis has been exacerbated by the Commission for University Education’s decision that universities students with a minimum C+ grade. This means those with a lower score will not be admitted in the self-sponsored Module II (parallel) programmes that universities used to admit part-time students paying market rate tuition fees. These programmes have been a veritable cash cow for universities. Their elimination makes a serious dent in the universities’ bottom line.

is a serious challenge to the sustainability of universities. In the enrolment, some universities had less than a quarter of their enrolment capacity taken up. Of the 615,773 candidates who sat exams last year, made the cutoff grade of C+ to join university.

Equally problematic for universities is the overall decline in . This is evident in the declining resources for teaching and infrastructure, poor governance and outdated approaches to teaching, curricula and assessment. All of this has left universities unable to maintain high quality teaching and learning.

Strikes by university professors aren’t uncommon in the country. What impact does this have?

A major impact is the disruption of learning. For maximum effect, faculty strikes occur during term time when students are learning. So far in this current strike, students have lost more than half a semester of instruction. This means students will take longer to complete their academic programmes; it will be more expensive for them and the institution.

Faculty strikes also heighten the divide between the academics on one hand, and the university administrators and government on the other. To resolve the numerous problems confronting universities, a cordial and collaborative relationship between the three stakeholders is paramount. However, in a climate defined by militant faculty unions and inflexible administration and government, it’s not possible to forge common ground to address institutional challenges.

Finally, frequent and prolonged strikes are detrimental to the development of industrial labour relations in universities. Labour unions for academic staff were only revived in 2003, having been outlawed in 1979. Since then the relationship between the union and the state has been adversarial. The union has defied to call off the strikes. The government has also failed to honour agreements with unions concluded after protracted negotiations. These violations run counter to the development of good labour practices in universities.

What must be done to avoid future disruptions?

While academic salaries are contentious the world over, the current model of reviewing university salaries in Kenya is outdated. The Collective Bargaining Agreement award salary increases without regard to faculty productivity and market performance of their discipline.

I have suggested a that takes into account the cost of living, productivity of academic staff, and the competition universities face in attracting and retaining academics in specific disciplines.

This approach requires that salary increases have three components:

If implemented, disruptions would be a thing of the past since academics would be able to seek salary increases based on performance and market conditions.