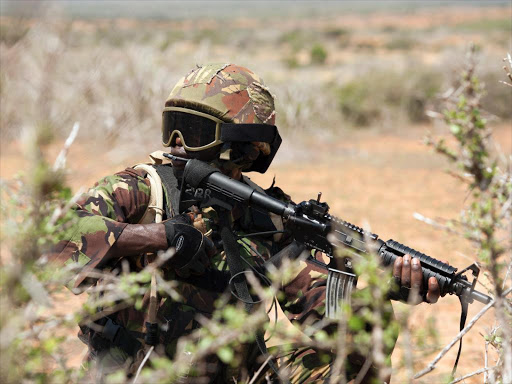 A Kenya Defence Forces (KDF) soldier, part of the African Mission in Somalia (AMISOM), secures an area during a foot patrol on the outskirts of the controlled area of the old airport in the coastal town of Kismayu in southern Somalia November 12, 2013. /REUTERS

On 16 October 2011, Kenyan troops crossed the border into Somalia. The was that Kenya’s national security was threatened by the Somalia-based Islamist militant group, Al-Shabaab. The terrorist group had in fact carried out a number of during the months preceding the operation.

There’s still considerable disagreement about the reasons for Kenya’s military action in October 2011.

More than six years after Nairobi made the drastic move, Kenyan troops are still in Somalia and Al-Shabaab is still considered a threat to Kenya. Numerous terrorist attacks have been carried out by the Somali group, including the on the Westgate shopping mall in 2013.

There are a number of possible explanations as to why the Kenyan authorities made the decision to engage Al-Shabaab in Somalia. These range from trying to prop up the Kenyan army’s image, to currying favour with the West, to making the north east of the country safer. Some strategies have proved more successful than others.

One possible explanation for the action is that the Kenyan Defence Force was eager to show that it could actually fight a war. In the run up to the action, the Kenyan military had been stung by Ugandan President Yoweri Museveni’s mocking remark that it was a ill-equipped to face a guerrilla insurgency.

Added to this were about Uganda’s growing military footprint in Somalia which could threaten the self-perception of the KDF as a superior military power in East Africa. So crossing the border deploying troops in Somalia was part of an exercise to in the eyes of the population in the midst of allegations of corruption.

Some that some senior officers expected that the Kenyan troops committed to Somalia could eventually join the African Union Mission in Somalia. The countries contributing to the mission at the time were Uganda, Burundi and Djibouti.

The integration of Kenya into the mission would have meant that some, if not all, of the costs of the military action would be funded by international donors. In these Kenyan officers’ calculation, joining the mission would mean the government would have to find less from the national budget.

Combined, these factors gave the Kenyan army a strong institutional interest in crossing over into Somalia.

Nevertheless, the then Kenyan president Mwai Kibaki to approve the invasion. He seems to have been by the Minister for Internal Security George Saitoti, the Defence Minister Yusuf Haji, the Chief of the Defence Forces Julius Karangi and the head of the intelligence Services Michael Gichangi.

An important decision maker in this group was Yusuf Haji, an ethnic Somali. Haji was known to be , Jubaland, inside the borders of Somalia close to Kenya. Jubaland is a potentially rich region with lush rangelands and farmlands as well as offshore oil and gas deposits.

Haji was also known to back the push to unite his Ogadeni clan scattered across northern Kenya, Ethiopia and Somalia. Leading academic and expert on Kenyan politics David Throup has that “personal economic and political interests of senior Kenyan politicians and soldiers from Northeastern Province’s Ogadeni Somali community” were decisive factors in the decision.

Economic and military aid from the West

There is a third factor. Since the 1998 bombing of the US embassy in Nairobi, Kenya has been perceived as a on the continent. As a result, the country has become one of the of Western foreign aid and security assistance on the continent.

Despite the close relationship between the West and Kenya, in the years leading up to 2011 Washington had become about Kenya’s inability to implement political and economic reforms. Towards the end of 2011 Nairobi was facing the possibility of Washington reducing its assistance.

Kenya’s incursion could therefore be seen in the context of a country propping up its image as a reliable ally in the global war on terrorism. Nairobi was keen to present the intervention as part of the ongoing Western-led war on terror. A crucial official argument was that the invasion was an .

A fourth explanation is Kenya’s desire to make the vast semi-arid north-east safe for tourism and foreign direct investment. Further south lies Lamu, the focal point of the . Violent attacks by al-Shabaab in the north-east would not only keep the tourists away from the region but also deter potential foreign investors.

There are also great expectations related to and to the establishment of huge transportation systems linking Lamu port with the Kenyan and South Sudan oil fields and the 80 million people in the Ethiopian market.

Only a few months after the Kenyan army started the incursions into the southern part of Somalia, a was signed. And less than half a year after October 2011, .

If the main reason for the incursion was to make Kenya safe from al-Shabaab and attract foreign direct investments, the impact is less obvious. There has been some foreign investment, but far from enough.

If the main driver was to improve the Kenyan army’s image, it can be described a success. The defence force has in the Kenyan population.