• Brookside says over 160,000 farmers from 300 dairy groups will benefit from training courses.

• This will help to increase milk production for improved earnings and adherence to quality standards along the value chain. 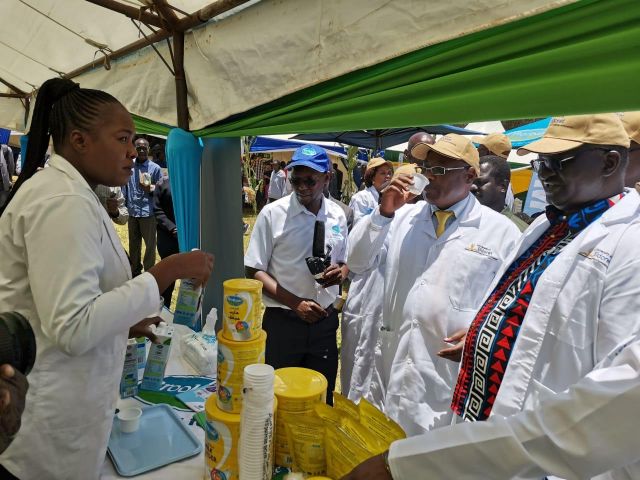 This, according to the processor, represented a five per cent climb over the previous year’s earnings.

He said the processor has resumed training of farmers across the country after a two-year disruption caused by the Covid-19 pandemic.

He spoke on Saturday during an agribusiness trade fair at the University of Eldoret.

Kabaki said the capacity building sessions for farmers would consolidate gains made by the processor in growing milk production across the country.

“Our training strategy revolves around sustainability in the dairy industry and empowerment of dairy farmers. We are creating a distinct opportunity for our farmers to access new on-farm technologies and ideas for better efficiencies that would further improve milk quality and earnings,” he said.

He said over 160,000 dairy farmers drawn from 300 dairy groups will benefit from the training courses, with emphasis on increased milk production for improved earnings and adherence to quality standards along the value chain.

“Over the past 29 years, we have cultivated an excellent partnership with our farmers, who supply us with quality raw milk. We have put all our farmers, whether as individuals or as members of supply groups, into raw milk supply contracts, which assures them of a reliable market and guaranteed payments for milk delivered,” Kabaki said.

“In order to further expand the market available for milk from farmers, we have invested in innovative products such as lactose free and fortified milk, as we seek to further widen our sales net. The expanded processing capacity and sales market means we shall take in all the contracted milk volumes; hence at no time would we ration supply, even in the seasons of plenty. We will therefore continue to buy 100pc of all contract volumes supplied by our farmers,” he said.

Margaret Kibogy, Kenya Dairy Board managing director, said by the start of April milk production had dropped by 15 per cent, which is against monthly production of 74 million litres of milk.

The national annual milk production is at 5.28 billion litres, and milk marketed in the formal sector is at 800 million litres per year.

She said the low production led to an increase in the price of milk by between Sh5 to Sh10 for a 500ml packet.

Kibogy attributed the decrease to the poor rains experienced in the October-November-December short rains season in 2021 and the current drought experienced in more than 23 counties.

"Our dairy sector depends on the October-December short rains which sustain the sector during the dry months of January to March. However, last year, there was depressed rain, hence the low production,” said Kibogy.

She said recovery of the industry is dependent on the rain and that with the rains being experienced in some parts of the country, the industry is likely to start stabilising.

The county is the highest milk producer countrywide with 430 million litres annually.
Counties
2 months ago
Post a comment
WATCH: The latest videos from the Star
by AGATHA NGOTHO Science Writer
Star Farmer
25 September 2022 - 23:00
Read The E-Paper