Cold weather to continue in most parts of Kenya - MET

Current drought affecting ASAL regions of the Northern and Eastern sectors of the country will worsen.

• MET says fog formation in the Highlands East of the Rift Valley including Nairobi
County may pose a danger to motorists due to low visibility.

• The weather man advised drivers in affected areas to be cautious, especially along the Kikuyu-Kinungi stretch of the Nairobi-Naivasha Highway. 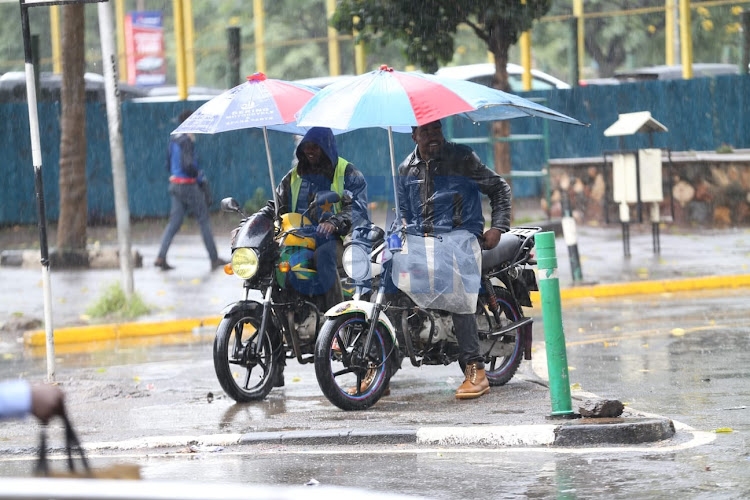 Boda Boda riders wait for clients in the rain in the Nairobi CBD on February 22, 2022.
Image: FILE

Cold weather condition is expected to continue in some parts of the country according to Kenya Meteorological department.

The weather outlook for August indicates that cool/cold and cloudy/foggy conditions with occasional rains are expected to prevail over the Highlands East of the Rift Valley, Nairobi County, and the Central and South Rift Valleys.

The August rainfall outlook released in July by the Kenya Meteorological department showed that most of the country will experience near-average temperatures.

“This is with the exception of the South Rift Valley and parts of the southeastern (Kajiado) region, where temperatures will be above average, and pockets in the northeastern (Marsabit) and northwest experiencing near-average temperatures with a slight tendency to be below average,” said MET.

“The rainfall forecast for August 2022 is based on regression of Sea Surface Temperatures (SSTs), SST gradients, the expected evolution of global SST. This is in addition to upper air circulation patterns over Western Kenya and the Coastal region and climatology,” said David Gikungu, director of Kenya Meteorological department.

The forecast further indicated that Counties in the Lake Victoria Basin Region, the Highlands West of the Rift Valley, the Central and South Rift Valley, and the Northwestern parts of the country are likely to receive enhanced rainfall.

Gikungu said the sunny and dry weather conditions expected over the ASAL areas of Northeastern, Northwestern and parts of the Southeastern lowlands are expected to have negative effect on food, water, pasture and browse for consumption.

“It is anticipated that the current drought affecting the ASAL regions of the Northern and Eastern sectors of the country will worsen. Conflicts over the scarce resources, particularly water, pasture, and browse, are likely to continue,” he said.

“Close monitoring of the situation is therefore necessary to avert the stress on human life and loss of livestock. The expected enhanced rainfall in the Highlands West of the Rift Valley, Central and North Rift Valley is likely to provide sufficient soil moisture to sustain agricultural production,” said Gikungu.

Dress warmly as you head out to vote, Met says it’ll be chilly

Droves of Kenyans are expected to travel this weekend for the voting on Tuesday.
News
1 month ago

How women can dress warmly but remain cute