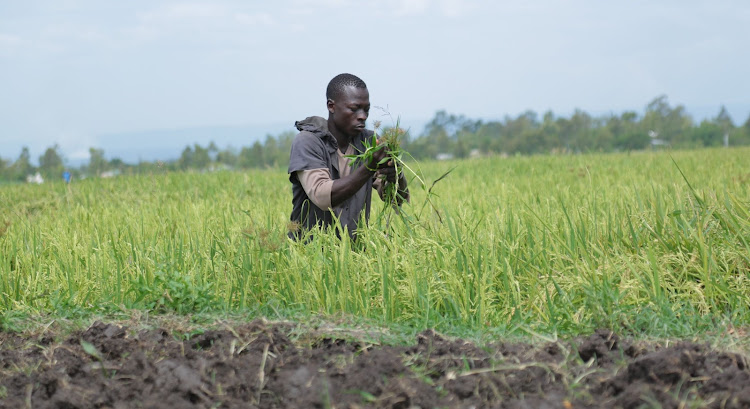 Sylvester Adoyo, a farmer from Ahero Irrigation Scheme, has been farming rice for the last four years. He took over the farm after his father passed away.
Image: AGATHA NGOTHO 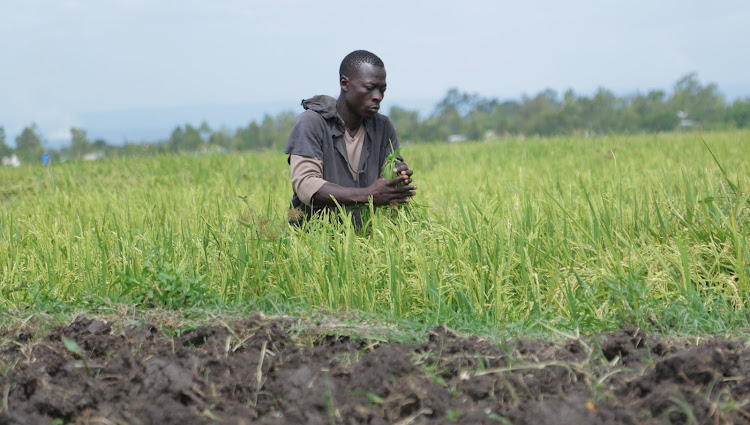 A sense of gloom has settled in Ahero Irrigation Scheme, Kisumu county, for rice farmers amid rising cost of fertiliser and bird invasion in farms.

Sylvester Adoyo, 31, a farmer from Ahero Irrigation Scheme, has been farming rice for the last four years after he took over the farm from his father who passed on.

He has been farming in four acres of land, but currently has been forced to lease out two acres in order to use the money to cultivate the other two acres due to the high cost of production.

“The cost of production has now doubled and farming has become expensive compared to when I started four years ago. I used to spend Sh2,500 for land preparation in one acre but today, this has gone up to Sh3,000 per acre," Adoyo said.

"It has been a challenge and sometimes I wish I could lease out all my land and forget about rice farming. This is because I am not able to maintain that high cost of production.”

Adoyo told the Star that bird invasion has become a menace in the area and a burden to many farmers.

He said, to scare away the birds, you need about four people in one acre and each person is paid Sh4,000.

“In total, you need about Sh24,000 just to keep the birds away. The birds are so many and one must employ at least four people to control the birds," he added.

Adoyo said before, Kisumu county would spray the fields to control the birds, but this is not happening and farmers have been left on their own, and have to bear the cost of scaring away the birds.

Adoyo said a kilo of paddy rice can go as low as Sh30 and at a high of Sh45 per kilo when the market prices are good.

His cost of production per acre includes fertiliser at a cost of Sh18,000, land preparation at Sh3,000, cost of a combined harvester at Sh6,000 and the cost of scaring birds which can be as high as Sh24,000. His total cost of production is about Sh51,000.

He harvests roughly 30 bags of 90kg bags in an acre and a kilo is selling at Sh41.  He said market for the rice is another big challenge, and even if you get it, it is at a lower price than what rice farmers in Mwea are selling.

“When you compare the cost of production and what you sell, you find that you get nothing at the end and that is why most farmers decide to lease their land rather than grow rice,” he said.

National Irrigation Authority communication officer Daniel Nzonzo said bird invasion has been a big change to rice farmers but this has not deterred the farmers from producing rice for the growing population.

"This is an increment of 290,000 acres. With more resources, we can be able to push this to beyond 1.2 million plus acres under irrigation.”

He added that they have been expanding existing irrigation projects, just like Mwea Irrigation Scheme, which has been expanded to put an extra 10,000 acres under irrigation.

"Ahero Irrigation Scheme, which was started 50 years ago has seen tremendous increase in acreage. To date we have 16,000 acres which is an increment of over 10,000 acres in the last 10 years," Nzonzo said.

"We are also expanding Bura Irrigation Scheme and doing the gravity canal to be able to convert the water conveyance system from pump-fed, which is expensive to gravity-fed system.

"These expansion activities are geared towards ensuring we achieve the Big Four Agenda and empower Kenyans to have food on their table.”

Nzonzo said irrigation is at the centre of the Big Four Agenda because when farmers get enough food to eat and surplus, they are able to afford money to take care of their housing and health needs.

He further said that due to such interventions, the agency has been ranked the best performing parastatal by the Ministry of Public Service and Gender.

A report by the Public Service Performance Management and Monitoring Unit for the 2020-21 financial year showed that the organisation was the best performing institution followed by University of Embu and Tharaka.

“Being ranked number one in the country is not a mean achievement. This means the work of providing irrigation infrastructure is being realised," Nzonzo said.

"We are keen on ensuring we scale up irrigation because it has a potential of even three million acres with enough water storage. We are doing studies to find out how many acres can be realised.”

Once agriculture was devolved, many farmers in most counties have been complaining over lack of extension services
Counties
4 months ago

The seeds are early maturing, tolerant to diseases and high yielding.
Counties
4 months ago
“WATCH: The latest videos from the Star”
by AGATHA NGOTHO Science Writer
Star Farmer
07 June 2022 - 23:00