ANY TIME IS TEA TIME

• Purple tea has similar properties as red wine and blueberries and the more you drink, the better your health. 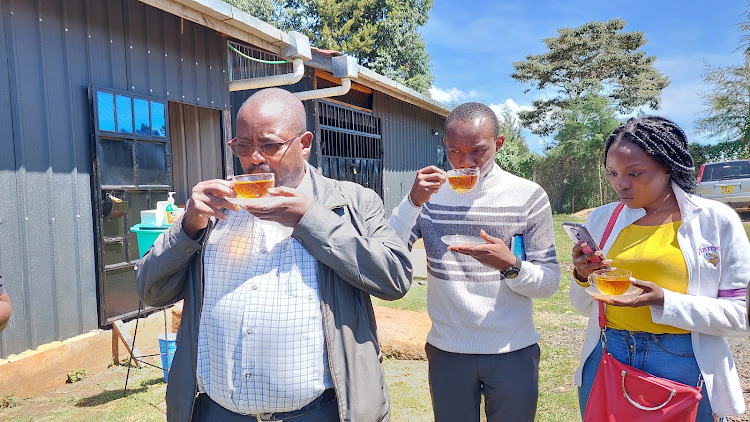 James Marete, assistant director in charge of technical and advisory services with Tea Board of Kenya in Kericho county and staff from Tea Board, take black tea at Ernestea Cottage Tea Factory in Kericho.
Image: AGATHA NGOTHO

Did you know tea contains anti-ageing properties and continuous consumption of the beverage guarantees long life?

Experts and value chains in the tea industry say one should drink at least eight cups of tea every day to maximise health benefits.

James Marete, assistant director in charge of technical and advisory services with Tea Board of Kenya in Kericho county, said on Wednesday one should take tea every two hours.

He spoke during a media field event on tea issues organised by the Tea Board of Kenya in Kericho.

“We are encouraged to drink more tea, for better health. Tea is supposed to be taken with hot water to get the maximum medicinal benefits. Equally, to avoid adulteration of medicinal benefits, a consumer should not add sugar and milk to tea," Marete said.

"It is recommended that one should take a cup of tea after every two hours to fully benefit from the endowed therapeutic value of the beverage.”

Tea is a medicinal plant that contains a group of vital chemicals that help speed up metabolism and burn fat, therefore contributing to weight management.

It also has anti-ageing properties, especially purple tea. Purple tea has similar properties as red wine and blueberries and the more one takes it, the better their health becomes.

Research shows that due to tea consumption there is one province in China where life expectancy stands at 86 years.

“It is recommended that every person should explore tea because it is a healthy drink. Our local consumption of tea is at seven per cent and people need to take more tea, because it will guarantee a healthy population and increase the earnings of farmers,” Marete said.

Globally, tea is the second most consumed beverage after water followed by coffee, orange juice, beer, soft drinks such as sodas, wine and vodka.

Data from the Tea Board of Kenya indicates that Kenya is the third-largest producer of tea in the world after China and India.

However, Kenya consumes only seven per cent and exports the rest. This makes Kenya the leading world exporter of tea. More than 20 per cent of the tea consumed around the world comes from Kenya.

“I think Kenyans do not consume much tea because they do not understand tea and what its benefits can do to them,” Marete said.

“Most Kenyans take tea in the morning, but it is encouraged that one should take more whenever one has an opportunity. They say anytime is tea time and the more tea you take the better your health.”

Tea was first introduced in Kenya in 1903 by the Ken brothers in Limuru, Kiambu county. It is now being grown in more than 20 counties.

The brothers, Marete said, wanted to see if tea could do well in Kenya, so they planted five bushes. The trees are still standing to date.

Afterwards, cultivation of tea started in Kenya, with commercial production beginning in 1924. The cash crop was grown on plantations and it was purely a 'white man’s crop'.

Marete said under the supervision of the then colonial government, Africans were allowed to start growing tea sometime in 1956-1957. 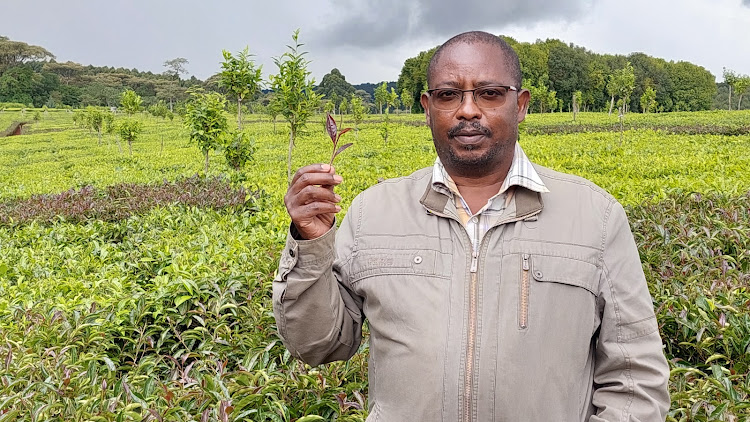 James Marete, Tea Board of Kenya assistant director in charge of technical and advisory services, at a farm in Tea Research Institute in Kericho county
Image: AGATHA NGOTHO

The number of factories has increased to 70 smallholder tea factories.

Marete said KTDA continued to manage and promote tea on behalf of smallholder farmers until 1996 when the World Bank under the Structural Adjustment Programme (SAPs) recommended the privatisation of KTDA in the wider context of the full liberalisation of the agriculture sector.

“In 1999, a sessional paper was tabled in Parliament outlining how KTDA would be privatised. This was completed in 2000 when KTDA was privatised and handed over to tea farmers as a private entity under the Companies Act Cap 486," he said.

"In 2000, KTDA changed its name to the Kenya Tea Development Agency and to date it is charged with the responsibility of promoting and developing tea business among the smallholder farmers.”

Tea farmers get Sh3 billion bonus due to better quality

Part of the investment of the tea fund will include tea planting programme at an estimated cost of Sh12.3 billion
Business
3 months ago

Tea plucking machines to be introduced to farmers

The tea plucking machine is currently selling Sh25, 000, which the CS says is not affordable to many farmers
News
3 months ago
“WATCH: The latest videos from the Star”
by AGATHA NGOTHO Science Writer
Star Farmer
06 May 2022 - 15:21