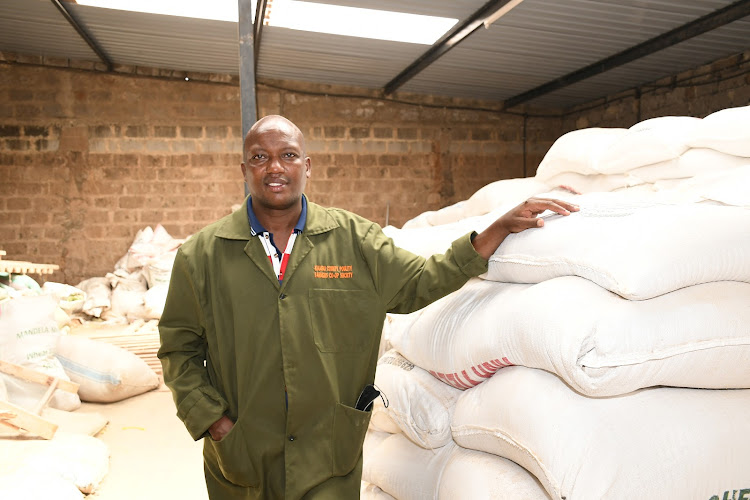 They say when life gives you lemon, you make lemonade.

Faced with the challenge of an influx of eggs into the country in 2018, Kiambu poultry farmers were almost abandoning the venture until they realised there is strength in unity.

Since then, the lives of their 700 members has not been the same again, and despite some hiccups, it is easier working as a group than as individual farmers.

The cooperative,which is located in Thika town, was also started to support farmers in lowering their cost of production.

Zachary Munyambu, the coordinator of the group, said the cooperative was formed to help find a common market for their produce and build a bargaining power.

“We were able to start off with the help of two area MPs who enabled us meet with the former Agriculture CS Mwangi Kiunjuri.  The CS advised us to start a cooperative within the 12 subcounties of Kiambu county,” he said.

Once they were able to aggregate their produce, they started selling eggs to Garissa and Mombasa counties but transportation became a headache and expensive since they didn't have their own mode of transport.

“We started engaging brokers to market our produce but now we are planning to have a central market either in Ruiru or Juja,” said Munyambu.

“To start us off, we decided that all the 200 registered members would contribute Sh2,000 each. We later asked the members to add Sh10,000 per person to help in buying equipment, " said Munyambu.

"We bought mixers, milling and weighing machines and other equipment used in feed manufacturing,” he added.

Munyambu divulged that they started with a capital of Sh1.5 million and put a small profit margin of only Sh100.

He said before they could get things running, they contracted a feed manufacturer to make feeds for the cooperative a per their requirement.

With time they were able to start producing feed for themselves as per the requirement by the necessary government regulatory bodies.

He said they manufacture layers and broilers mash and pig feeds, and that their prices are slightly lower than the market prices.

The cooperative's main market target is the members who are encouraged not to buy animals feeds on credit to ensure smooth and effective running of the society.

Munyambu said most of the members are below operating capacity or are at 40 percent total closer due to the current challenges in animal feeds.

He said all has not been well for the farmers who had been enjoying fair feed prices because the cost of raw materials for making animal feeds has become scarce and expensive.

“About 280 members have closed their poultry farms and most affected are women, youth and retirees,” he confirmed.

In 2018, Munyambu said it cost Sh550 for a farmer to raise a day old chick to five months when it is ready for sale, but today it shot to Sh850.

“Farmers with more than 1000 birds can hardly manage to run their business. Currently most them are leaving the business," he said.

“Soya and maize prices have been on the rise since mid-last year. A kilo of soya was going for Sh65 but it has almost doubled and is selling at Sh100. Maize prices have increased by Sh600, from Sh2500 per 90kg bag to current price of Sh3,100,” Munyambu.

He added that: “The same has happened to maize germ, vitamins for making animal feeds and also the gunny bags that we use to package the feeds.”

Munyambu said between November 2021 and January this year, every product has gone up by between Sh50 to Sh100.

He said the poultry industry is slowly dying and if no action is taken, Kenya may be forced to start importing not only animal feeds but also animal by-products such as eggs and meat.

“The Big Four Agenda on food security and the Buy Kenya, Support Kenya initiative may not work if no immediate action is taken,” said the coordinator.

He said he is vying for an MCA position in the area in the 2022 elections to be in a better position to influence policies that could benefit the farmers at county level.

Macharia is among the first farmers to start growing a new variety of the crop which has high yields.
News
3 months ago

More than 60 Kwale farming groups to be trained on modern farming.
Counties
3 months ago

My yoghurt business was triggered by need to curb milk wastage

Wairima says what was being offered in the market had been manufactured with additives and preservative.
News
4 months ago
by AGATHA NGOTHO Science Writer
Star Farmer
25 January 2022 - 22:00