Project targets over 500,000 farmers and pastoralists in 24 Counties

• Agriculture CAS Anne Nyaga says the current severe drought being experienced in Kenya calls for an urgent need to combat climate change and its effects.

• She says agricultural productivity is declining and there is a huge loss of crops, livestock, fish and investments in agriculture due to climate change. 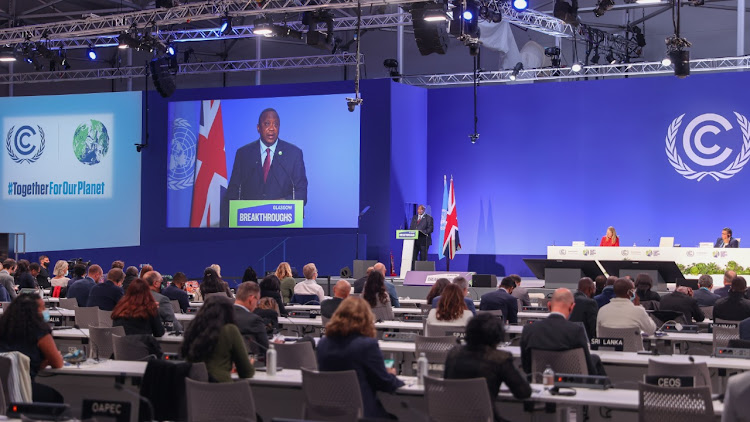 President Uhuru Kenyatta during one of his addresses at the UN Climate Change Conference in Glasgow on November 2, 2021.
Image: PSCU

Over 500,000 farmers and pastoralists in 24 Counties will benefit from a Sh31 billion project funded by the World Bank and the Government.

She spoke on Thursday during the Kenya Climate-Smart Agriculture Project (KCSAP) Scientific Conference in Naivasha.

Nyaga noted that parts of the country are currently experiencing a severe drought occasioned by climate change, hence the urgent need to combat climate change and its effects.

She said the effects of climate change include declining agricultural productivity and loss of crops, livestock, fish and investments in agriculture.

This is due to changing temperatures and precipitation regimes and the increased frequency and intensity of extreme weather events.

Nyaga said the theme of the conference, Climate Smart Research for Sustainable Agriculture and Livelihoods, is rather apt given the devastating effects of climate change the country is experiencing.

This is in addition to supporting agro-weather, market and advisory services and contingency emergency response.

“About 522,000 households of smallholder farmers, agro-pastoralists, and pastoralists have benefitted directly. Other beneficiaries include 340,000 households from the county-level and public-private partnership investments and over 600 micro-small-and-medium enterprises,” said Nyaga.

Vinay Vutukuru, a senior agriculture economist with the World Bank said they working in conjunction with the Government and currently funding ongoing various agricultural programmes in 45 Counties to the tune of Sh67.9 billion.

He said the projects have been designed to boost food security as well and improve the governance status of institutions.

Ruth Njeri Githieya a beneficiary of a scholarship under the programme is currently pursuing a master’s in food science and technology at Jomo Kenyatta University of Agriculture and Technology (JKUAT).

“I am currently undertaking research on Irish potatoes in Nyandarua County on value addition and how farmers can minimize wastage,” said Njeri.

Kenya ranked 31st most vulnerable despite contributing marginally to emissions.
News
1 week ago

National and County governments to work towards attainment of 10 % forest cover.
News
2 weeks ago