Data from KNBS statistics reveal that in 2019 there were 1.9 million donkeys in Kenya 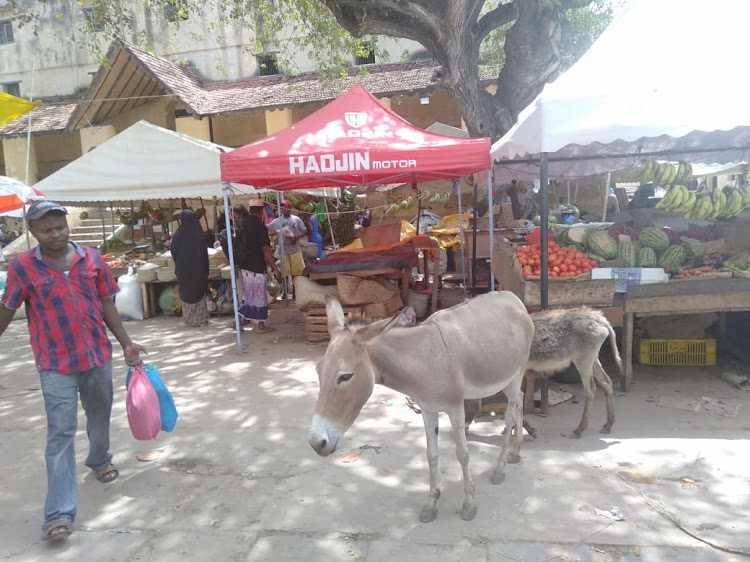 Donkeys at the Mkunguni Square.They are responsible for much of the littering.
Image: CHETI PRAXIDES

Farmers in the country are worried that the recent High Court ruling that froze ban on slaughtering of  donkeys will precipitate animal theft.

Speaking during a community dialogue forum organized by Inades Formation Kenya in Kithyoko area in Machakos County, donkey owners said they  are worried of the negative impact it will have on their source of income.

Peter Muguti, Community Leader, Kithyoko area said the area has over 300 donkey owners who cannot allow an investor to interfere with teir  source of livelihood at the expense of their profits.

According to Elizabeth Wanja, managing director, Inades Formation Kenya, the dialogue forum is a great public participation platform where the community are given an opportunity to express their unbiased views.

''We have vowed to support donkey farmers  in quest to protect their source of livelihood. Just like residents of Kithyoko, farmers across the country have already  started collecting signatures to petition both  national and county governments to close all donkey slaughter houses ,” Wanja said.

According  Inades Formation, one donkey slaughter house has a capacity of slaughtering 100 donkeys per day meaning that it will only take less than a year to have the donkey animals extinct in Kenya.

''In Machakos County alone we have 23,000 donkeys and as we all it takes more than 24 months for the donkeys to breed,”Wanja said.

The animal lobby group also argue that there is no scientific proof that donkey breeding will be easily achieved.

It said that  United Kingdom, France,USA and other developed nations have failed to undertake donkey breeding.

This is a tactics these Chinese investors wants to use to get away from the reality and if we don’t watch out, our donkeys will be wiped out by the year 2024.

Florence Ndeti, director, CARITAS, Kitui also voiced her concern over the re-opening of the donkey slaughterhouses.

''We shall stand with the community in their petition and with our legal experts we are going after these greedy investors who only care for profits but not the livelihood of Kenyans,''Ndeti said.

According to research, the global demand for donkey skins and meat is mostly driven by Chinese markets. In China, donkey meat and skins are used to produce anti-ageing products and traditional medicine known as ejiao.

This traditional medicine consists of gelatin that is extracted from boiled donkey hides. It’s claimed to strengthen the blood and generally boost health and vitality.

Ejiao has a long tradition in traditional Chinese medicine but previously only the elite in society could afford it. Over the past 30 years, a much larger section of the Chinese population has been able to afford it, driving demand.

Local markets in China cannot keep up, so Chinese businesses turned to other sources. Kenya was a good source of donkeys – it had about 1.8 million in 2010. And under the law, they are considered food animals like pigs and cows.

To meet the demand, four export slaughterhouses were licensed and started operating in 2016.

These abattoirs could slaughter 1,260 donkeys a day. Donkeys are sourced from donkey keepers, others are stolen and some are even brought in (legally and illegally) from Ethiopia to meet the demand.

There are currently no donkey farms in Kenya that can supply the slaughterhouses.