• Government projections on maize production under the Big Four agenda was 50 million bags of 90kg this year.

• Agriculture PS Hamadi Boga says the country is expected to have 35 million bags this year against an annual demand of 54 million bags. 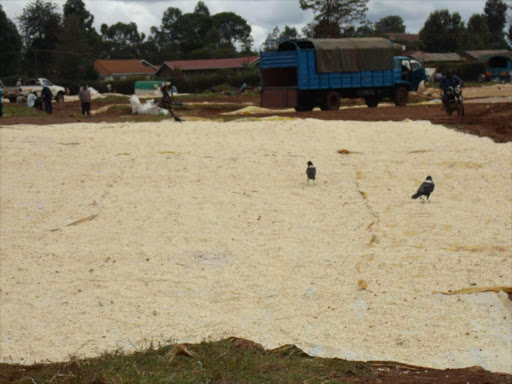 The country is likely to have 30 per cent post-harvest losses due to the 0ngoing heavy rains.

Crop and Research PS Hamadi Boga has said the rains could spell doom for farmers in the North Rift, especially those who have started harvesting the long rains maize crop.

The PS said farmers may be forced to sell their maize in haste due to lack of storage facilities and hence poor prices.

“The process of managing this period from harvest all the way up to the market is a critical one as we are likely to lose about 30 percent of the harvest and this is too much,” Boga said.

The PS said farmers are using the traditional method of stooking maize to dry it while on the farm.

James Karanja, a maize breeder, said stooking involves leaning maize stalks against each other into a tee-pee-like structure.

"This allows sun and air to dry the maize cobs to help make peeling away the husks easier. After stooking for few days or weeks, farmers then snap cobs from the stalks and remove husks," Karanja said.

Boga said traditional approaches of post-harvest management are not effective as they are tedious, labour intensive and the maize may rot because of the ongoing rains.

He said the Ministry of Agriculture has provided mobile driers and constructed storage facilities in different areas for farmers to store their produce.

Agriculture CAS Andrew Tuimur urged farmers to utilize the warehouse receipt services being offered by the National Cereals and Produce Board to help manage post-harvest losses.

“With the warehouse receipts system, farmers can store their maize and sell it when the prices are good. They can also access loans with the receipts. Currently, the services are being offered by NCPB but going forward, they will also be availed by the private sector,” Tuimur said.

Government projections on maize production this year under the Big Four agenda was 50 million bags of 90kg but the PS said the country is expected to have only 35 million bags this year.

According to data from USAID, 10 million Kenyans suffer from chronic hunger and will need food aid.

Boga urged farmers to come together and integrate their activities to manage post-harvest losses and adopt good agronomic practices.

He said the country’s crop yields has been affected by poor agronomic practices, post-harvest management and soil management.

“In parts of North and South Rift, farmers are doing about 15 bags of maize per acre against a potential of 20 to 25 bags per acre. Currently, we can only do 17 million bags per year against the potential of 80 million bags. Hence we need to be systematic in the way we manage our post-harvest,” Boga said.

He said the yields have reduced even in commercial farming and this is a cause to worry.

“We have overstretched our soils, farmers are using a lot of DAP fertliser and doing monoculture without circulation of planting. There is need to campaign on proper farm management to help farmers increase soil fertility and crop production,” Boga said.