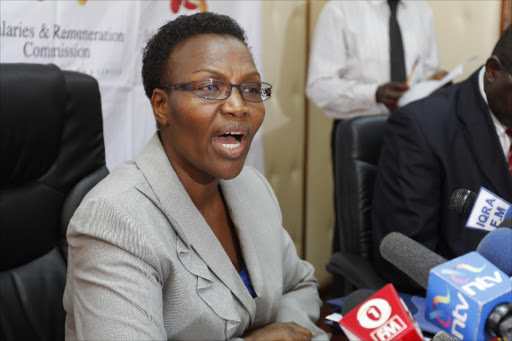 PostBank of Kenya has appointed former Salary and Remuneration Commission boss Sarah Serem as its chairperson of the Board of Directors.

Through a statement, the bank said her appointment, which is for a period of three years was with effect from January 13, 2023.

"Ambassador Serem brings a wealth of experience and expertise in government administration, and we are optimistic that under her leadership, we will advance our role of offering financial services to the people of Kenya," the statement read.

During her official assumption of office at the Postbank headquarters,  Serem noted that she is delighted with the appointment and is looking forward to a rigorous three-year term.

“I look forward to working with the Bank’s leadership to meet our customers and stakeholders needs as well as advance the savings agenda of the country seeing as we are the institution mandated by the Government to mobilise national savings," she said.

Before her appointment, she served as the Kenyan Ambassador to China and the chairperson of SRC.

Justice Thande declined to extend the order to suspend reintroduction of transactions charges.
News
3 days ago

Komb Green Solutions, a CBO in Korogocho, is rehabilitating Nairobi River and reclaiming the riparian land around it.
Counties
1 day ago
Post a comment
WATCH: The latest videos from the Star
by MANNY ANYANGO Digital Journalist and Social Media Executive
News
26 January 2023 - 09:15
Read The E-Paper