MP Babu spoke while sending condolences to the Magoha family

• Magoha and Uhuru enjoyed a cordial relationship beyond work as seen in the former president's tribute.

•He wished the Magoha family God's comfort during the difficult period of immense grief. 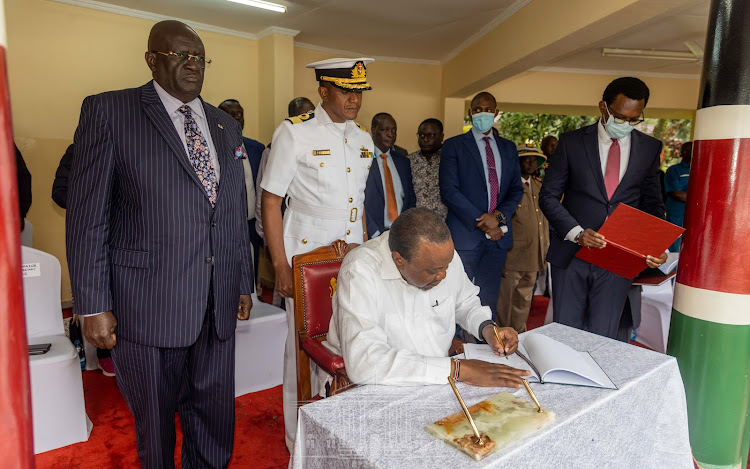 Magoha passed on at the age of 71 on Tuesday at the Nairobi Hospital.

" You were the only best decision Uhuru Kenyatta made during his tenure," he said on Tuesday

Babu was speaking as he sent his condolences to the Magoha family.

"Babu you are tried and tested and you can be anything in this country. Go and save this country," Babu said.

Magoha and Uhuru enjoyed a cordial relationship beyond work as seen in the former president's tribute.

"It is unfortunate and painful that we've lost my friend Prof George Magoha at a time when his family is mourning his brother," the former President said.

He wished the Magoha family God's comfort during the difficult period of immense grief.

Magoha also thought highly of Uhuru as seen on August 17, 2022, when he thanked him for appointing him as Education CS.

“Eagles always just keep flying. When the eagle is going, it just disappears into the air. That is just what is going to happen to us. As the president’s handymen you expect us to go with him,”  Magoha said.

He was appointed to the Education docket in March 2019, after serving as chairman of the Kenya National Examinations Council (KNEC), a position that he held since 2016.

Magoha served at the Education ministry until October 27, 2022, when President William Ruto appointed his successor.

He had been in charge of the transformation in the school syllabus, and training of teachers to march with the new CBC syllabus.

Magoha died at the Nairobi Hospital on Tuesday evening aged 71.
News
4 days ago

The body of Magoha is expected to be taken to the morgue for preservation.
InPictures
4 days ago
Post a comment
WATCH: The latest videos from the Star
by MAUREEN KINYANJUI News Reporter
News
25 January 2023 - 09:11
Read The E-Paper