Project to create at least 3,000 direct jobs for both skilled and unskilled labour

•The project will also create at least 3,000 direct jobs at both skilled and unskilled levels. 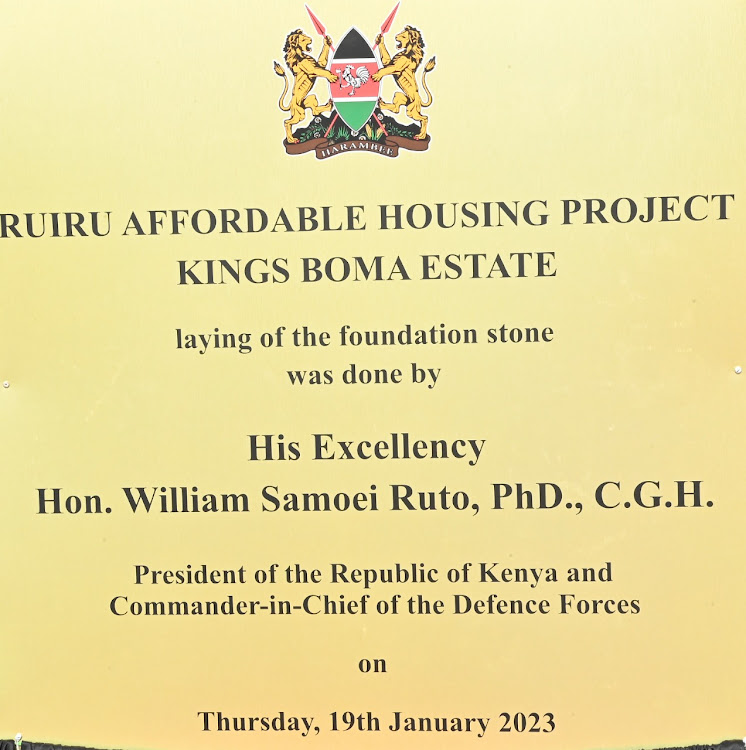 Last Thursday, he presided over the groundbreaking of the Kings Boma Estate, an Affordable Housing Project in Kiambu county.

The estate is located near Kenya Prisons Staff Training Collage, Ruiru along the Ruiru-Kiambu road in Ruiru.

The project site on land measures approximately 2.47 Ha (~6,10 acres) which previously had government pool houses with 37 households that were relocated to pave way for the redevelopment.

Therefore, once complete the government will reserve 10 percent of one block of houses for rental purposes and to re-stock government estates assets in lieu.

Project Developer-Kings Developers Limited is expected to set up 1,050  housing united for the project which will be in blocks of flats, 11 storeys high.

The Sh3 billion project will take 36 months ( two years) and will be completed in January 2026.

Under his government, President Ruto said that the Affordable Housing Project is an initiative by the government to facilitate Kenyans to access home ownership.

The Lands CS also highlighted that the proposed development aims to contribute to the government’s commitments to the construction and sustainability of neighborhoods.

Therefore, the project will integrate greening technology such as new approaches for water and waste management, the provision of solar lighting for common areas and street lighting, among other sustainability interventions.

Outdoor kids' play area (noting the development’s moniker: The Fun Estate, The Green Estate) will also feature in the project.

For security and safety, there will be CCTV installed at entry and exit points, controlled access and well-planned security checkpoints and provision for gas cylinders in the kitchen yard

Community Hall will also be erected for society use, Wi-Fi service provisions, Cabro paved driveways and solar street lighting and solar lights in all common areas.

In line with the government’s intention to provide job creation and income-generating opportunities for the local mwananchi, CS  Mwangi states that the strategic partner on this project will be working with local communities to ensure that there is participation in both employment and the local supply chain.

“This project will adopt the ringfencing strategy for the supply of doors, windows, and other earmarked products which will be sourced from local MSMEs and Jua Kali Associations who will have corporatised,” he said.

The related contract amounts for the project is estimated at Sh500 million, of which 50 percent will be awarded to women-owned businesses.

The project will also create at least 3,000 direct jobs at both skilled and unskilled levels.

“The jobs will be offered to both women and men ensuring that there is the integration of typically excluded groups in the hiring of construction workers,”  Mwangi said .

The project is set to deliver 1,050 housing units.
News
2 weeks ago
Post a comment
WATCH: The latest videos from the Star
by MAUREEN KINYANJUI News Reporter
News
25 January 2023 - 10:40
Read The E-Paper