At least 4.35 million Kenyans are in dire need of relief food. 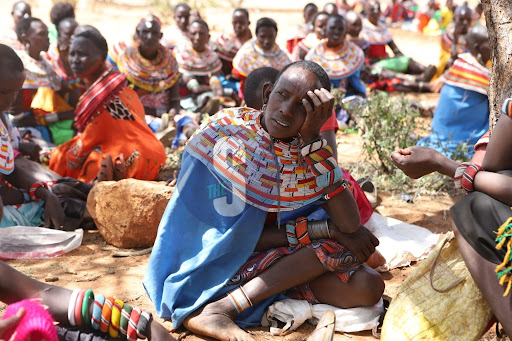 Secure land tenure rights will help to address the throes of the chronic food crisis ravaging the country, human rights groups have said.

Speaking at the Golden Tulip hotel in Nairobi on Wednesday, the groups and land actors said one of the root causes of the chronic food crisis is the insecure land tenure rights for millions of smallholder farmers and other food producers.

At least 4.35 million Kenyans are in dire need of relief food.

Romano said competition for access to and control over land has increased sharply in recent decades.

“Land inequality is growing, conflict over the land resource is also increasing,” she said.

Romano said women, indigenous people and the youth do not have access to land adding that there is a need to recognize the fundamental links between land governance and the right to food.

The FAO official said the Committee on World Food Security in 2012 adopted the Voluntary Guidelines on the Responsible Governance of Tenure of Land, Fisheries and Forests in the Context of National Food Security.

Romano said while the guidelines are voluntary, they are based on binding human rights standards and principles.

“While the guidelines have had a significant impact on policy development at the national level and global discourse, governments must be held accountable for their implementation and outcomes at the local level in terms of actual tenure security, especially for the people who are marginalised or in a vulnerable situation,” she said.

She said civil society organizations and other actors can use human rights obligations to hold governments accountable for protecting legitimate land tenure rights of the most vulnerable populations.

During the event, the urgency of protecting tenure rights was reiterated.

A new monitoring tool that will help to strengthen responsible land governance was also launched.

The tool was developed with support from the German Federal Ministry for Economic Cooperation, TMG research, the Danish Institute for Human rights and Malawi Human Rights Commission will help actors to explicitly link land rights and human rights.

The tool has been used in Malawi to monitor human rights situations, reporting and advocacy as well as in research.

It has also helped to raise awareness of human rights and land tenure.

This leads to the government possessing land often without meaningful consultation or fair compensation.

The poor and marginalized whose livelihoods depend on natural resources and are disproportionally affected by and are at risk of their land being taken by authorities as they often lack security of tenure and have fewer opportunities to effectively claim their legitimate tenure rights in the often unequal power relations with authorities.

Kenya Land Alliance CEO Faith Alubbe said the tool will give actors an opportunity to be able to link the international policy framework to the local ones.

“Chapter four of our Constitution is very clear in terms of the protection of human rights and some of the provisions being alluded to in international frameworks. But at the international levels, they are in several bulky instruments and the navigator will help us narrow down,” Alubbe said.

Alubbe said it will be very easy for communities with capacity building to just log on and find what is provided for in international laws with regard to land rights.

“The linking of our laws to international laws and being made available by the navigator and monitoring tool will help communities to be able to influence policy, get awareness and link their community protocols to human rights frameworks,” she said.

CHIGOGO: East Africa's hunger crisis is being exacerbated by conflict

It serves as a sobering reminder of the region's need for peace, conflict resolution and climate change mitigation.
Opinion
1 week ago
Post a comment
WATCH: The latest videos from the Star
by GILBERT KOECH News Reporter
News
25 January 2023 - 22:01
Read The E-Paper