Magoha died at the Nairobi Hospital on Tuesday evening aged 71. 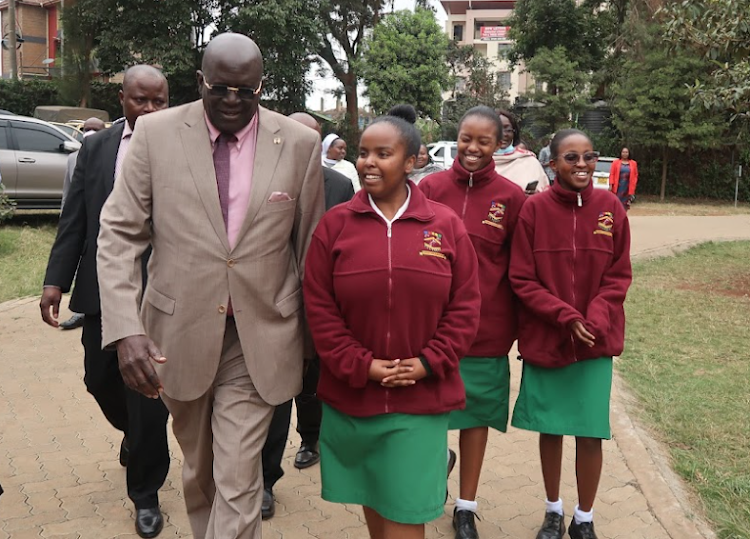 Various leaders across the country led by President William Ruto have come out to eulogise former Education Cabinet Secretary George Magoha as a dedicated leader.

Magoha died at the Nairobi Hospital on Tuesday evening aged 71.

The leaders through their social media handle shared their condolence messages saying the death of the former CS was a huge loss to the Education sector.

The President joined other leaders and Kenyans from other parts of the world in mourning the passing of Magoha at the same time sending his condolences to his family.

President Ruto described Magoha as a towering giant of our time, a great man who stood tall in the academy, where he excelled in learning, teaching and research, as well as in administration.

He said he led robust turnaround interventions at the University of Nairobi and the Exams Council.

The President said throughout his tenure in the Education sector, he demonstrated commitment to high standards in public service and uncompromising integrity.

"I have been privileged to know and work with the late Professor in many capacities, from the university where I completed my post-graduate studies, to government, where he served with distinction as the chair of KNEC and later as my colleague in Cabinet," he said adding that the country had lost a gifted, unique, distinguished and great servant of Kenya.

Deputy President Rigathi Gachagua said the late will be remembered for his independence of mind and fearlessness, Prof. Magoha was an accomplished professional who served Kenya with zeal as witnessed when he served as the CS for Education and other posts held earlier.

In his field of Medicine, Rigathi said Magoha had made immense contributions to the practice of medicine and research.

"In the education sector, he left an indelible mark at the University of Nairobi- rising through the ranks to become VC, at the ExamsCouncil as Chairperson, and as CS for Education".

He added, "I will miss Prof Magoha, a man I personally admired for his forthrightness and ethics. My thoughts are with the family, friends, and colleagues of Prof Magoha".

Former President Uhuru Kenyatta who appointed Magoha the Education CS in January 2018 described Magoha as "a celebrated academic who leaves behind a strong legacy of public service."

"It is unfortunate and painful that we've lost my friend Prof George Magoha at a time when his family is mourning his brother," the former President said as he wished the Magoha family God's comfort during this difficult period of immense grief.

Raila said Magoha was an illustrious scholar and a distinguished medical doctor who left an indelible mark on our country's education system.

"Am deeply saddened to learn of the passing of Prof. George Magoha," he said on his Twitter handle.

Prime Cabinet Secretary Musalia Mudavadi said Magoha will be remembered as a staunch believer in self-actualization.

"He took to his tasks with gusto and a single-minded determination that's rare. Many will recall his iron-clad grip on the University of Nairobi as Vice-chancellor, and lately as Cabinet Secretary for Education".

Cabinet Secretary Ministry of Defence Aden Duale noted that the good professor will be remembered for many things, among them, the reforms he brought to the education sector.

"The life and service of Prof. Magoha is the gift he leaves us as a country", he said.

Kalonzo said the late was an exceptional leader who will be greatly missed.

National Assembly speaker Moses Wetangula noted that the death of the professor was a big loss and blow to the education sector.

"I have vivid memories of this great and tough scholar who had distinguished himself by his immense contribution to the education sector of our country."

Wetangula added that Magoha will be fondly remembered for his selfless service in impacting change in the education field while at the helm of the education ministry.

"On behalf of the National Assembly, my family and myself, I wish to offer our sincere heartfelt condolences and convey our sympathies and solidarity to Professor’s family, professional colleagues, and friends".

"The former Education CS, a scholar and medic of outstanding repute, has left us all in deep shock! Words cannot express our collective heartbreak as a nation. I condole with his family and Kenyans at large following this loss."

"May his true and honest soul rest in eternal peace and may the Lord give his family, friends and colleagues fortitude to bear this loss," Security advisor to the President, Ambassador Monica Juma said.

Kisumu Governor Anyang Nyong’o said the death of his long-time friend was heartbreaking, Unbelievable and devastating.

"We have lost a towering scholar. An excellent educationist. A man full of life and humour. This death has dealt a terrible and unforgivable double blow to the Magoha family, given that their other son, Prof Alex Magoha who died in the USA recently is to be buried this weekend. On behalf of my Family and the People of Kisumu County, I send my heartfelt condolences to the Magohas, friends, and the people of Gem and Siaya County".

Homabay Governor Gladys Wanga said behind his serious demeanour was a gentle soul committed to excellence.

Cs Information, Communication and Digital Economy Eliud Owalo said Magoha will be remembered as a focused professional in his field, and a candid stickler for discipline and efficiency in institutional leadership and management.

Nairobi county Senator Edwin Sifuna said Magoha was a towering figure in our education system, and his sudden death has indeed come as a shock to many

"In times like these when little makes sense, my prayer is that God sees the family through," he said.

Nairobi county women Representative Esther Passaris said his dedication and contribution to the education sector will not be forgotten.

"Professor Magoha was academically astute, disciplined and a role model who discharged his duty with passion and dedication."