He said it will end badly for President William Ruto 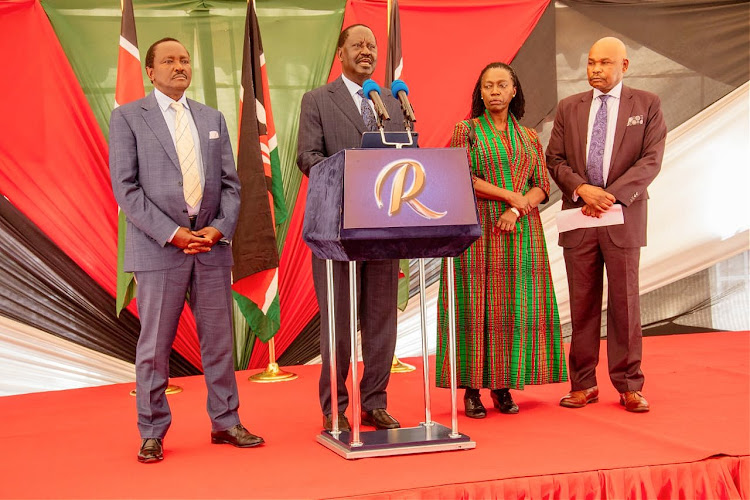 Azimio leader Raila Odinga has said the coalition will not sit back and watch a return of the Nyayo era.

"No one should lie to this regime that we will sit back and watch a return of the Nyayo regime by another name," he said.

Raila addressed the media after Azimio MPs walked out of the hearing to remove the four dissenting IEBC commissioners on Thursday.

The former Prime Minister said the removal process is vindictive and vile.

"With all the problems Kenyans are going through, a focus on punishing four commissioners who did not agree with their chairman is trivial, vindictive and vile. It must stop. It will not end well," he said.

Raila said it will end badly for President William Ruto.

"If deepening and widening the divisions among Kenyans is what the UDA regime wants, we will only be too happy to help them along that path," he said.

Narc Kenya leader Martha Karua has also alleged that Ruto has given all the indications of becoming a dictator.

"We will not tire from reminding Kenyans that if we drop this, we are in for a ruthless president than we have ever seen," she said.

Karua said the President is acting out of the law by failing to constitute a selection panel for IEBC commissioners whose terms end in January.

"The IEBC Act requires that six months to the end of the term of chair a selection panel must be formed to find the new chair," she said.

The committee is chaired by Tharaka MP Gitonga Murugara.
News
1 week ago

He said the constitutional threshold for removal is so high.
News
1 week ago
Post a comment
WATCH: The latest videos from the Star
by MANNY ANYANGO Digital Journalist and Social Media Executive
News
24 November 2022 - 16:20
Read The E-Paper