Atwoli adds another feather to his illustrious career

Atwoli has held his position as part of the Board of Trustees NSSF since 2001.

• Atwoli has held his position as part of the Board of Trustees at the National Social Security Fund (Kenya) (NSSF) since 2001 to date.

• Since 2008, he has been Member of the Governing Body of the International Labour Organization, (ILO) in Geneva, Switzerland. 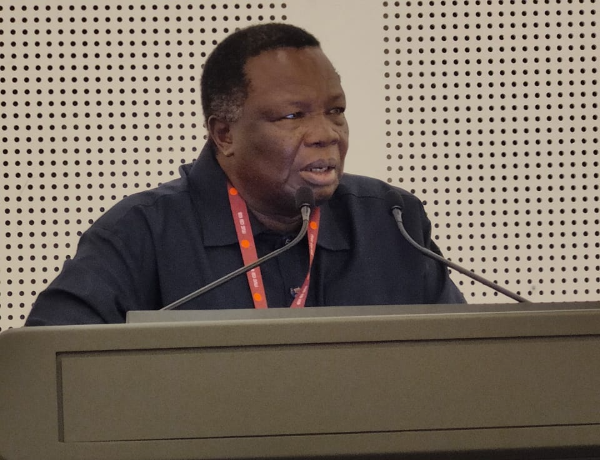 The Central Organization of Trade Unions SG Francis Atwoli was this morning re-elected for the fourth term to the position of Vice President of the International Trade Union Confederation, ITUC, during the ongoing 5th Congress in Melbourne, Australia.

The ITUC remains the largest trade union organization in the world with a membership of over 200 million drawn from 163 countries and has its headquarters in Brussels, Belgium.

Atwoli's name was proposed on the floor of the over 2,000 delegates to the Congress and unanimously approved by the delegates hence granting him another four years term in the leadership of the ITUC.

It also reports on the composition of the various delegations per country as well as the extent of their individual voting power.

Atwoli was equally, this morning elected, unopposed, as a titular member to the General Council of the ITUC to represent the Eastern Africa Region, after being proposed by a delegate from Tanzania and seconded unopposed by his colleagues in the region including by trade union leaders from Uganda, Rwanda, Burundi, Somalia, Mauritius among others.

Others elected during the hotly contested ITUC elections were the new Confederation’s General Secretary Luca Vasentini from Italy who garnered a total of 65 million votes beating his main challenger Kemal Ozkan from Turkey who got 23 million votes represented by the 2,000 plus delegates who attended the Congress.

In his acceptance speech to Congress, Atwoli recognized and appreciated the 'huge' confidence that his trade union colleagues worldwide continue to have in him to serve them.

“The position you have just bestowed on me this morning isn't an easy one, you are sending me to war, to fight for working men and women wherever they are in the world, I am only your soldier whose actions will always come from you, the commanders, and I will never let you down, I will stand for your interests and put up my life for you always,” he said.

Atwoli further assured the new General Secretary of the support from COTU in ensuring he delivers on his vision. He welcomed the GS to Kenya as COTU (K) looks forward to hosting the Congress of ITUC-Africa which will bring over 1,000 delegates from Africa and beyond.

Atwoli thanked Sharan Burrow, the outgoing ITUC General Secretary, for her dedication to strengthening the trade union movement in Africa during her tenure.

The 5th Congress of the ITUC started on Thursday, November 27, 2022 and this morning, Australia’s Prime Minister Anthony Albanese addressed the delegates.

The Congress comes to an end on Tuesday.

Atwoli has been the President of the Pan African Labour movement, the Organization of African Trade Union Unity (OATUU) since 2014 to date.

Since 2008, he has been a Member of the Governing Body of the International Labour Organization, (ILO) in Geneva, Switzerland.

He is also a Board Member of the Training Centre of the International Labour Organization in Turin, Italy since 2011.

Atwoli has held his position as part of the Board of Trustees at the National Social Security Fund (NSSF) since 2001.

Since 2001, he has been a Council Member of the National Industrial Training Authority of Kenya (NITA).

With the newly elected ITUC General Secretary Luca Visentini from Italy of whom we will serve together as his Vice President of our global trade union ! God Bless. pic.twitter.com/V1DydrQ25I

Cotu boss Francis Atwoli was on Friday re-elected as the Vice President of the International Trade Union Confederation (ITUC).Atwoli's name was ...
News
4 years ago

Unions key focus this year will be climate-friendly jobs, workers’ rights and just wages
News
2 months ago
Post a comment
WATCH: The latest videos from the Star
by NANCY KAMAU and MAGDALINE SAYA
News
21 November 2022 - 08:40
Read The E-Paper