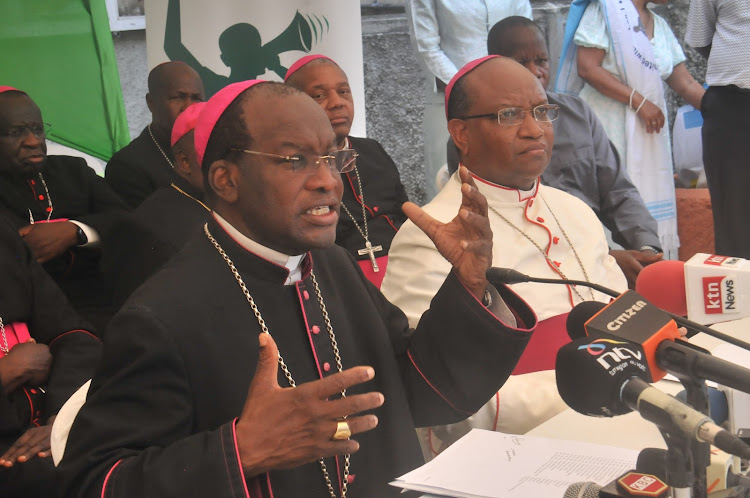 The Kenya Conference of Catholic Bishops (KCCB) has called on the government to declare the drought situation in the country a national disaster.

The bishops were addressing the media at the Holy Ghost Cathedral Catholic Church in Mombasa on Thursday.

They said that the situation especially in the arid and semi-arid regions has now reached a crisis level.

In a statement read by KCCB chairman and Mombasa Archdiocese Bishop Most Reverend Martin Kivuva, they called for urgent and decisive action from all actors.

“We urge our government, organisations and Kenyans at large to study and think through ways to enhance post-harvest food management. This is in view of increasing our food security and providing food banks,”  Kivuva said.

The bishops commended government efforts in releasing food to affected areas in the country.

They, however, raised concerns that in some parts the food might have taken longer to reach the intended persons and it might have also benefited those who do not deserve it.

“We appeal to the government to set up a better coordinated multi-agency system of distributing emergency relief by engaging faith-based organisations to ensure that the support reaches the most vulnerable people and does not end up benefiting a few well-connected individuals,” Kivuva said.

He appealed to the government to finance school feeding programmes in areas affected by the drought so that no school-going child will drop out.

The bishops also called on the government to focus on delivering on the promises they made to Kenyans during the campaign period saying that this was not the time for political rhetoric and apportioning blame.

They asked Kenyans to safeguard against the tendency of being in perennial campaign mode instead of focusing on service delivery.

“Our elected leaders must take seriously the responsibilities that Kenyans have bestowed on them,"Bishop Philip Anyolo of the Nairobi diocese said.

"This is not the time for leaders to pass blame or engage in needless political rhetoric."

Anyolo further called on the opposition parties to play their role in keeping the government in check, in service delivery and in ensuring that it fulfils the promises it made to Kenyans.

“In the same vein, we remind all Kenyans that our constitution grants us the right to keep our elected leaders accountable and ensure that they deliver on their promises," Anyolo said.

"We need to remain vigilant and engage with our leaders challenging them to focus on service delivery and to be fully transparent in the use of public resources."

They applauded Kenyans for remaining peaceful during the entire electioneering period and also applauded all the constitutional institutions for standing out.

They said this was a manifestation of a maturing democracy which has begun to take root in the country.

Bishop Anyolo further raised concerns over the high cost of living in the country which he said was majorly attributed to the high taxes imposed on basic commodities.

He said that the prices of essential household items such as maize flour, cooking oil, rice, cooking gas and electricity among others continue to rise above the reach of ordinary Kenyans thus leaving millions struggling to put food on the table.

“We call on parliament to look into the taxation regime and consider practical fiscal policies like zero-rating some basic and essential food items. This will lead to a reduction in the prices of basic food items and petroleum products whose rise has a direct effect on the cost of living,” he said.

Nyeri Bishop Anthony Muheria urged the government to heighten its commitment to environmental issues saying that leaders should be deliberate in the war against plastic use which he said has led to the degradation of the environment and water pollution.

The bishops also called on Kenyans to submit their comments to the presidential working party on education that was constituted by President William Ruto to seek comments from Kenyans on the reviewing of the Competency-Based Curriculum (CBC).

Governor says drought situation is at alarming stage and has affected nearly 800,000 residents in Turkana
Counties
2 months ago

Ruto, during the COP27 summit rallied for support in dealing with the effects of climate change.
News
2 months ago
Post a comment
WATCH: The latest videos from the Star
by ONYANGO OCHIENG
News
10 November 2022 - 15:32
Read The E-Paper