Sabina held talks with the political doyen on Wednesday.

•Her comments come hot on the heels of Tuesday's heated debate in the National Assembly.

•The two political divides differed on the interpretations of Article 108, which guides the House on the election of the Majority Leader 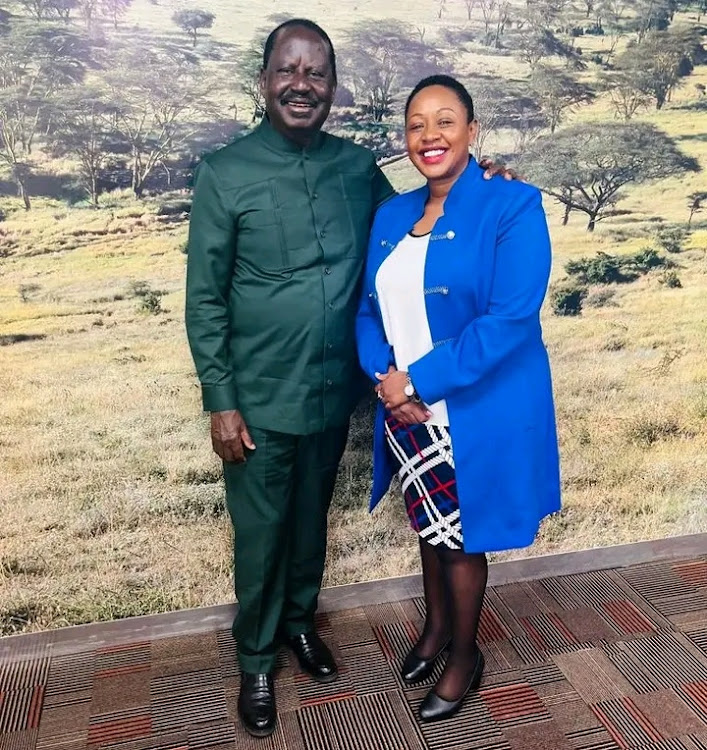 Nominated Member of Parliament Sabina Chege has said the Orange Democratic Movement (ODM) leader Raila Odinga stands out as her hero to date.

Chege made the remarks moments after holding talks with the political doyen on Wednesday afternoon.

She was among a group of local leaders who vehemently drummed up support for Mr Odinga in the August 9 Presidential Election which he lost to William Ruto of the Kenya Kwanza alliance.

“A great afternoon spent with our Azimio Captain Raila Amollo Odinga. and we continue to celebrate this man who for a number of years has spent his life fighting for the lives and freedoms we enjoy today,” she said.

Sabina further exuded confidence that Azimio la Umoja One Kenya alliance will bag the Leader of Majority in the National Assembly.

“As arguments and counter-arguments are made as to the majority in the National Assembly we remain confident that it will sway in our favor. Politics is a game of numbers,” she said.

Her comments come hot on the heels of Tuesday's heated debate in the National Assembly where both the Kenya Kwanza Alliance and Azimio la Umoja One Kenya Coalition parties both laid claim to designation of majority formation in the august House.

The two political divides differed on the interpretations of Article 108, which guides the House on the election of the Majority Leader.

Legislators from both sides were embroiled in a vicious spat on who calls shots at the National Assembly after Speaker Moses Wetang’ula revealed he had received three different sets of House leadership from Azimio la Umoja, Kenya Kwanza and Jubilee.

On the other hand, Azimio proposed Ugunja MP Opiyo Wandayi as majority leader and Robert Mbui as his deputy. Suna East MP Junet Mohamed was named as majority whip with Sabina Chege as deputy.