Mutua brought the development to light through a post on his social media page.

• Muuhozi, who is President Yoweri Museveni's son had Monday issued a veiled threat suggesting a possible incursion into the Kenyan territory. 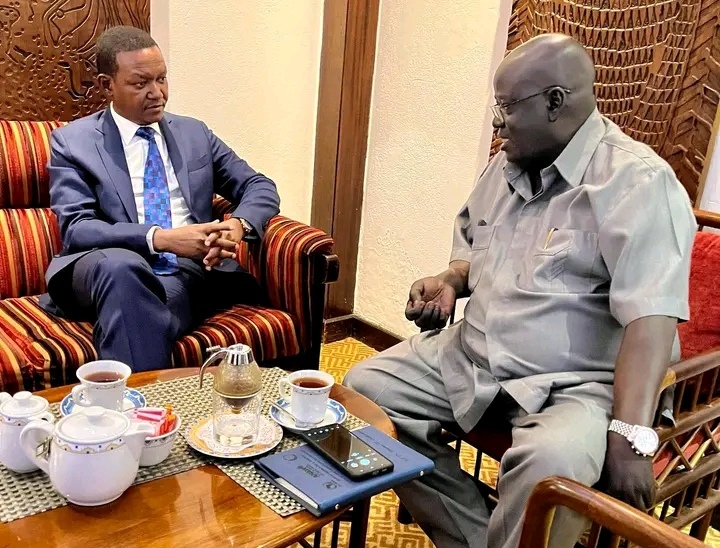 Mutua brought the development to light through a post on his social media page.

“This morning I shared a social cup of tea with Amb. Dr Hassan Galiwango - Uganda High Commissioner to Kenya. We discussed interesting matters. All is well,” Mutua said.

The development comes barely hours after Nandi Senator Samson Cherargei asked the Ministry of Foreign Affairs to summon Uganda's ambassador to Kenya over a series of disturbing tweets made by the commander of Uganda People's Defence Force (UPDF), Lt. Gen. Muhoozi Kainerugaba.

Muhoozi, who is President Yoweri Museveni's son had Monday issued a veiled threat suggesting a possible incursion into the Kenyan territory.

Cherargei said the sensational statements made by President Yoweri Museveni's son — currently serving as the commander of the land forces of the Uganda People's Defence Force — threatened the unity of the East Africa Community.

“I expect by morning, the Ministry of Foreign Affairs to summon the Ugandan ambassador to shed light on Gen. Muhoozi's social media outbursts & subsequent apology. This is undermining the spirit of unity of EAC," Cherargei said.

In his first hard-hitting tweet that whipped up an uproar, Muhoozi said it wouldn't take the Ugandan army two weeks to capture Nairobi.

He further said that Uhuru could have won the presidential elections if he had offered to vie for the third time.

Kainerugaba said Uhuru had all the trappings he needed to seal a third term in office but he squandered the opportunity.

"My only problem with my beloved big brother is that he didn't stand for a third term. We would have won easily!" he said.

Muhoozi rubbed salt on the wounds his earlier tweets had inflicted with a subsequent rhetorical question.

"I'm happy that members of our district in Kenya, have responded enthusiastically to my tweet. It's still 2 weeks to Nairobi! After our army captures Nairobi, where should I live? Westlands? Riverside?" he posed in another tweet.

"Haha! I love my Kenyan relatives. Constitution? Rule of law? You must be joking! For us, there is only the Revolution and you will soon learn about it!" he said.

Muhoozi, 49, rose to his current rank following his appointment in June 2021. It was the second time Museveni was promoting his son in the hierarchy of the army in six months.

The controversial commander of Uganda People's Defence Force (UPDF), Lt. Gen. Muhoozi Kainerugaba, has said he has no plans to attack Kenya after his father advised him against making such an ill move.

But on Tuesday Muhoozi appeared to have mellowed out, asking the myriad Kenyans on Twitter who had torn into him and called his bluff to loosen up a bit.

“I would never beat up the Kenyan army because my father told me never to attempt it! So our people in Kenya should relax,” Muhoozi tweeted.

Muhoozi went ahead to thank his East African supporters for helping him attract 600k followers on Twitter.

“Thank you, my followers. Let's make it to 1 million soon. I appreciate the love. Let me see how many East Africans still love me. Retweet and like for our project!”

He said he harboured no grudge against Kenyans who had jammed his Twitter page to scorn him for his sensitive utterances on Monday.

“KOT, I forgive you all for the insults you have hurled against me. Please let's work together to make East Africa great.”

It was only a joke, says General Muhoozi

Muhoozi Monday threatened to lead an incursion into the Kenyan territory.
News
1 month ago

Muhoozi Kainerugaba is the commander of Uganda People's Defence Force.
News
1 month ago