CS nominees with court cases will be fired, if convicted - Gachagua

Questions have arisen about the integrity of some of the cabinet nominees picked by President William Ruto.

• Gachagua noted that despite some of the Cabinet nominees having pending cases in court, none had been convicted.

• The DP, who also has a pending court case said he will be available if the court summons him and that is the case with the CS nominees. 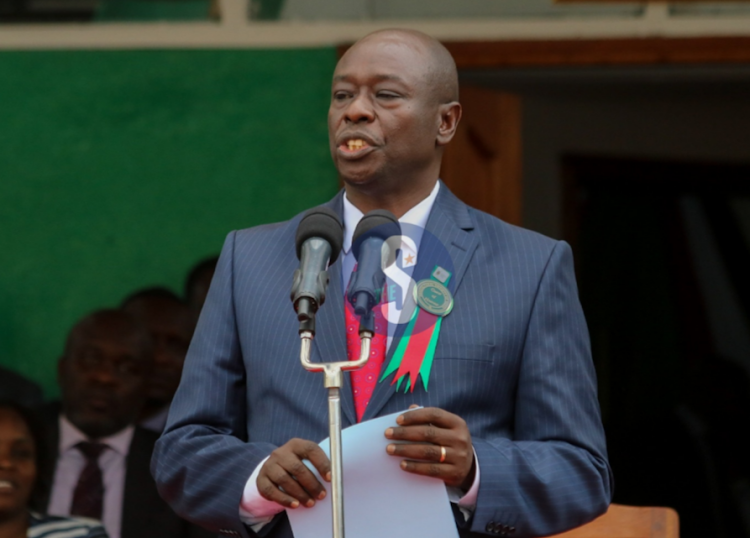 Deputy President Rigathi Gachagua now says that if any cabinet appointees are found guilty in court, they will be sacked.

Speaking on Sunday night, Gachagua noted that despite some of the Cabinet nominees having pending cases in court, none had been convicted.

"In the unfortunate event that they are convicted, these CSs will lose their jobs," he said.

While referring to the Kenyan Constitution, Gachagua argued that all public office holders can only be barred from holding office if they are convicted and have exhausted all avenues of appeal.

He further claimed that the charges some of them are facing is punishment by the former regime for taking sides prior to the August polls.

"But we cannot say, that Mithika Linturi, a great man, a great mind be denied the chance to serve as the CS of Agriculture because the government at that time wanted to punish him for taking a stand,” Gachagua added.

He said it would be unfair and against the Kenyan constitution to deny anyone the opportunity to serve Kenyans on the basis of fabricated charges.

"The presumption of innocence till proven guilty is a constitutional right... you cannot have some rights for certain people and you do not have for others because they are politicians."

Questions have arisen about the integrity of some of the cabinet nominees picked by President William Ruto.

CS nominees in question either have pending criminal cases or were previously arraigned in court to face various charges.

Before the nominees are vetted, Parliament will have to write to the investigating agencies, including the National Intelligence Service, seeking any adverse mentions of the individuals.

The nominee for the Agriculture docket who is the former Meru Senator Mithika Linturi, was in September last year charged with attempted rape.

The incident is alleged to have occurred at a hotel in Nanyuki.

Linturi refuted the claims and was subsequently released on a Sh500,000 bond and termed them as politically instigated.

“Charged with attempted rape, contrary to section 4 of the Sexual Offenses Act of 2006,” read the charge sheet.

The former Meru senator is also accused of committing an indecent act with an adult, contrary to section 11(A) of the Sexual Offenses Act of 2006.

Linturi was also arraigned in court, in February over hate speech remarks.

However, the case was later thrown out by a court in Nakuru where Chief Magistrate Ednah Nyaloti explained that the prosecution and the police failed to meet the deadlines given to present evidence.

Trade and Industry CS nominee Moses Kuria has also been on the radar of the Ethics and Anti-Corruption Commission for awarding CDF tenders to companies linked to his close relatives.

EACC had recommended the prosecution of the vocal former lawmaker.

“Investigations revealed that one of the directors of Finishline Construction is a brother to the MP and the MP was the beneficial recipient of the Sh3 million,” the EACC said.

Former Malindi MP Aisha Jumwa who has been nominated as CS for Public Service was charged in 2019 with murder over the death of Gumbao Jola in Ganda, Malindi Constituency.

Gumbao was shot in a scuffle that ensued during a by-election in Kilifi County.

In April, Jumwa appeared before the Mombasa Law Courts where her bodyguard was accused of firing at a crowd and subsequently killing the deceased.

The two, however, denied the charges and pleaded not guilty.

The DP, who also has a pending court case said he will be available if the court summons him and that is the case with the CS nominees.

"I'm giving you this guarantee, that anytime I'm called in court, I will appear .. I'm an innocent man, let me be there, let me be processed, let the witnesses come I ask questions, not just ministers, even the deputy president is ready to appear in court if I'm summoned," Gachagua stated.

The DP is facing trial over an alleged conspiracy to defraud Sh7.5 billion.

Live with it! Gachagua tells off critics on church visiting State House

"We have no apologies for having prayers in State House," he said.
News
1 month ago

Azimio describes the team as “the formal inauguration of a mafia state”.
News
2 months ago
Post a comment
WATCH: The latest videos from the Star
by MAUREEN KINYANJUI News Reporter
News
03 October 2022 - 07:51
Read The E-Paper