Gitau said that the house is guided by standing orders which are supposed to be followed.

•The standoff started when the UDA party leadership communicated to them their preferred nominee for the speaker's seat.

•The party fronted Charles Thiongo who was elected the speaker. 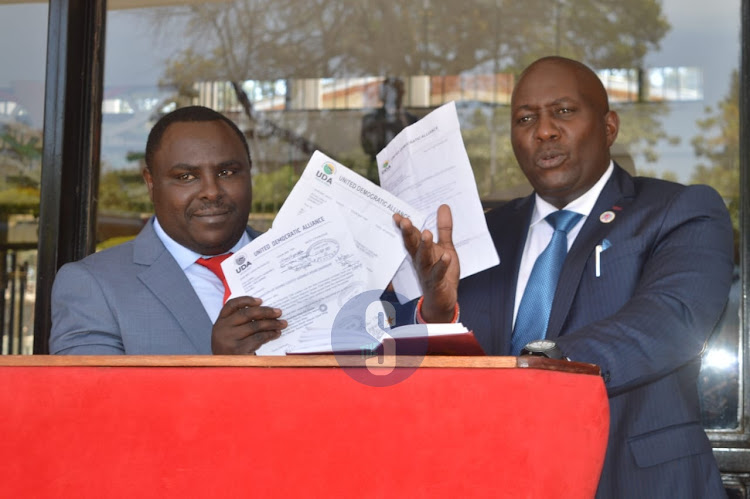 Nelson Munga MCA Ndeiya speaking at the county Assembly of Kiambu where he faulted UDA party over interference of house business in contravention to standing orders on September 28, 2022
Image: Stanley Njenga

Trouble is brewing at the Kiambu County Assembly with a section of MCAs now accusing the UDA party of interfering with its leadership.

The Assembly members, who were mostly elected on a UDA party ticket, say the party has been dictating to them who to occupy house leadership seats.

The standoff started when the UDA party leadership communicated to them their preferred nominee for the speaker's seat.

The party fronted Charles Thiongo who was elected the speaker.

The members however were to pick a deputy speaker within their ranks but the party, however, issued a communique directing its MCAs on who elect.

John Njiru, MCA hospital ward in Thika, was fronted by the party.

The standoff escalated on Monday after the two lists of leaders from the UDA party emerged.

Speaking at the assembly precincts, MCA Ndeiya ward Nelson Munga raised concerns about the move by the party to direct the assembly on its leadership.

Munga, who was eyeing the Majority leader seat, said it was against the house's standing orders for the party to dictate the Assembly leadership.

"We received several signed letters from the UDA bearing different names of House leadership. Procedurally we ought to have met under a parliamentary group meeting which was to be called by Governor Kimani Wamatangi. Members were not involved in agreeing on the positions," Munga said.

The letter dated September  27, was however communicated by the party to the assembly as the bonafide letter which was adopted by the house.

Gitau said that the house is guided by standing orders which were supposed to be followed.

He added that going forward, there will be a discussion on how the house will be conducted without outside interference.

"We have had several meetings as members and had tentatively agreed on how the positions would be shared. The party nominees had no set-out criteria for how they made nomination positions. We have set a very bad precedent and going forward, there might be division in the house," Gitau said.

Ngenda ward MCA Joe Kigara, the minority leader, said that from the onset, the parties should know that the Kiambu county assembly business is supposed to be driven by the Kiambu MCAs as the constitution gives them the autonomy to legislate on behalf of their electorates.

"We do not want interferences from outside as we want to drive the Kiambu agenda of legislation. The house deserves its independence and more so on oversight of the government as they need to do their mandate and we do our due diligence," Kigara said

"As the minority, we are going to be on the lookout so as no self-interests or personal agendas are being driven but agendas concerning Kiambu people."

Munga called on President William Ruto and his  Deputy to intervene and order UDA party officials to desist from controlling county assemblies and give Kiambu county Assembly space and autonomy to conduct its business without interference.

The new position was created by an Executive Order.
News
2 months ago
Post a comment
WATCH: The latest videos from the Star
by STANLEY NJENGA
News
28 September 2022 - 15:50
Read The E-Paper