He says the economy is ailing such that 65 per cent of taxes is used to pay debts.

• The president insisted that he will review NSSF to push Kenyans to save more.

• Ruto pledged that his administration is doing what it must do to restore security and peace in the troubled regions across the country. 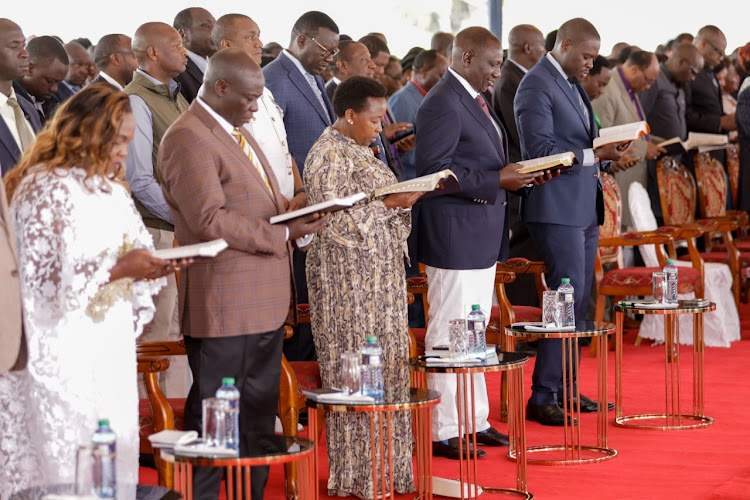 President William Ruto on Sunday made three prayer requests to the clergy with the economy topping the list.

The President said the Kenyan economy is ailing so much that 65 per cent of taxes collected are used to offset debts.

"Pray for the ailing Kenyans economy. We are chained to our debts where 65 per cent of the taxes we collect go into paying debts," Ruto said.

He spoke when he hosted a Thanksgiving prayer service at State House shortly after arriving back in the country from the US where he attended the United Nations General Assembly.

The service was one of a kind as it was the first since he moved into the residence following his inauguration as President on September 13.

The president reaffirmed that he will review the NSSF to push Kenyans to save more.

"Kenyans have not been saving adequately. Everyone who works in Kenya saves only Sh200 every month. We will review NSSF," Ruto said.

Ruto's second prayer request to the men of God was for them to pray for the country's security forces as they combat insecurity and maintain Kenya’s standing as an anchor state.

The President noted that the world was looking at Kenya to provide solutions for their challenges.

"I want you to pray for the peace of our country. Kenya is an anchor state. I spoke to many leaders over the last couple of weeks and they are looking at Kenya to provide solutions for the peace of our region. From Somalia to Ethiopia to DRC to South Sudan and the whole of this region,” he said.

To this end, the President challenged the police to deliver on their responsibilities noting that his government has supported them by giving them financial autonomy.

“They don’t have to wait for the office of the President anymore. They now have their own resources and they can deploy them in the best way they know and I will be demanding of them results,”Ruto said.

His third prayer request to the clergy was for them to pray against a spirit of conflict that has hit the country.

“Pray for our country so that the spirit of conflict and cattle rustling will be defeated and we are going to do our part as a government to make sure that we deal with our menace and keep peace in our country,” Ruto said.

The request came hours after bandits killed 11 people in Turkana East including eight police officer, a chief and two cilivians.

One of the victims was Thirdway Alliance party leader Ekuru Aukot's sister.

The President acknowledged that he was aware of the attack and pledged that his administration is doing all in its power to restore security and peace in troubled regions across the country.

The incident came hours after DP Gachagua vowed to deal with the bandits.
News
2 months ago

Our presidency is one of the greatest miracles of God - Gachagua

Speaking during the thanksgiving service at State House, he said their victory was God-allowed and given.
News
2 months ago
Post a comment
WATCH: The latest videos from the Star
by MAUREEN KINYANJUI News Reporter
News
25 September 2022 - 15:17
Read The E-Paper