IEBC postponed the election after the ballot papers' mix-up

•Mudavadi urged residents to vote for a side that will be in the government, saying the next administration is in Ruto's hands.

•Raila will be expected to court residents to vote for ODM Governor candidate Fernandes Barasa   as  their second Governor. 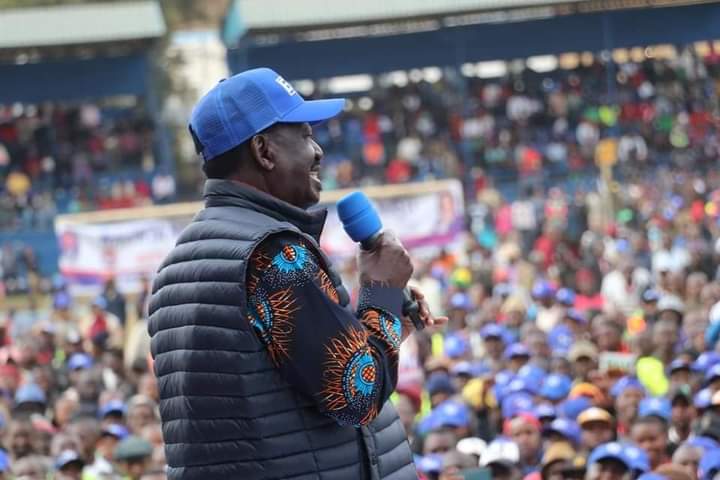 Azimio presidential candidate Raila Odinga has returned to Kakamega in an attempt to secure votes ahead of next week's elections.

This comes a day after Kenya Kwanza principal and ANC leader Musalia Mudavadi held six rallies in constituencies within the county.

Raila will be expected to court residents to vote for ODM Governor candidate Fernandes Barasa as their second Governor.

Kakamega residents will on Monday, August 29, 2022, elect their Governor after IEBC announced the date to conduct the election in the remaining wards, constituencies, and counties.

IEBC postponed the election after the ballot papers' mix-up in Mombasa and Kakamega counties.

On the list are parliamentary elections in Kitui Rural, Kacheliba, Pokot South, and Rongai Constituency in Nakuru County.

However, IEBC gave candidates in the electoral areas time to campaign until 48 hours before the elections.

The Kakamega race will pit the two major political formations in the last general election, Kenya Kwanza and Azimio.

The county has in the past been a key Raila’s bastion and the August 9 polls in other elective seats show ODM’s dominance in the area.

Mudavadi is, however, keen to snatch Kakamega’s top seat from the Azimio coalition.

Mudavadi on Thursday led a powerful delegation to the county to drum up support for Malala and enhance his bargaining chip in the larger Kenya Kwanza coalition.

Addressing a rally in Butere, Mudavadi urged residents to vote for a side that will be in the government, saying the next administration is in William Ruto's hands.

“There is no gambling because you can see clearly which side will form the next government. Do not let Raila cheat you that he still stands a chance to be the President,” he said.

“Those who were heading to the Opposition we are asking you to be in government by voting for Malala,” Musalia added.

Oparanya has denied the accusations by the candidate, saying he is not a candidate in the Kakamega race.
Counties
5 months ago

Why Raila, Ruto are not resting easy in Mombasa, Kakamega governor races

For Raila, the races would determine whether he still has a grip of the two county constituencies
News
5 months ago