All county functions to be reverted when I take office - Sakaja

•On February 25, 2020, former Nairobi Governor Mike Sonko and CS Wamalwa signed an agreement to transfer the functions to the national government.

•Sakaja commended the achievement NMS accomplished under the leadership of Director General  Mohamed Badi despite the challenges. 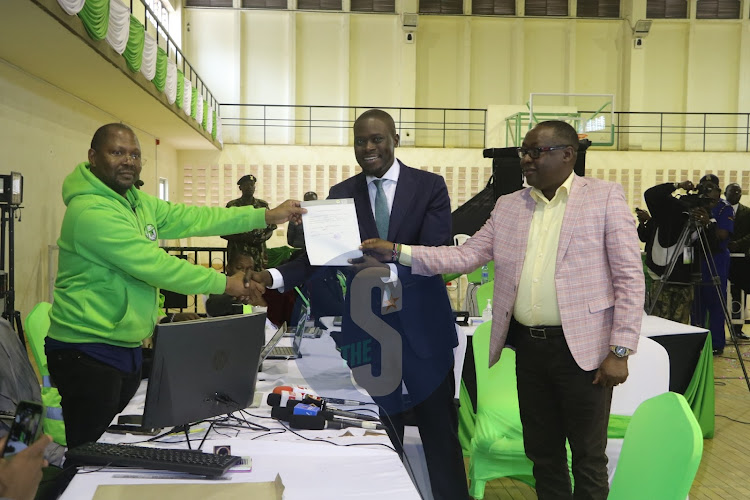 Newly elected Nairobi Governor Johnson Sakaja has affirmed that all county functions will be revered to City Hall after he is sworn in.

He emphasized that his government will spearhead all the 14 county functions, including those transferred under the Nairobi Metropolitan Services.

The Nairobi Metropolitan Services tenure was extended to August 9, 2022, and was added another three months extension in the deed of transfer, to allow for transition once a governor is elected.

"Further to article 9.1 of the deed of transfer, the duration of the transferred functions is hereby extended by a further period of six months from 25 February 2022 to 24 August 2022," reads a gazette notice.

According to the notice by Nairobi County Secretary Jairus Musumba, there will also be a three-month handover period to ensure continuous service delivery.

As a result, an assumption of office of the Governor will form a committee to oversee the transition.

Through Executive Order No. 3 of 2020, the functions included county health services, transport, public works, utilities and ancillary services, and county planning and development.

The signing of the Deed of Transfer left City Hall in control of less influential departments such as ICT and E-Government, Education and Sports, Agriculture and Livestock, Trade and Co-operatives and Devolution, Environment and Finance sectors.

President Uhuru Kenyatta on March 17, 2021, established the NMS and appointed Mohammed Badi as its Director General.

The Deed of Transfer gave NMS the mandate to oversee the functions for a renewable period of 24 months from the date of establishment.

In addition, Sakaja commended the achievement NMS accomplished under the leadership of Director General  Mohamed Badi despite the challenges.

"I want to thank NMS for the work they have done for this great city. I agree it has not been an easy journey but they have achieved and  I have learnt from them," Sakaja added.

The Nairobi governor race could soon turn into a one-horse race with Sakaja facing disqualification.
News
5 months ago

My two year legacy at helm of Nairobi County - Badi

He said he will head back to the military a happy man knowing he brought services closer to people.
News
3 months ago