The county woman representatives serve in the National Assembly.

•All 47 counties took part in choosing their next woman representatives.

•Some of the candidates retained their seats while others lost, as it is the norm with every election 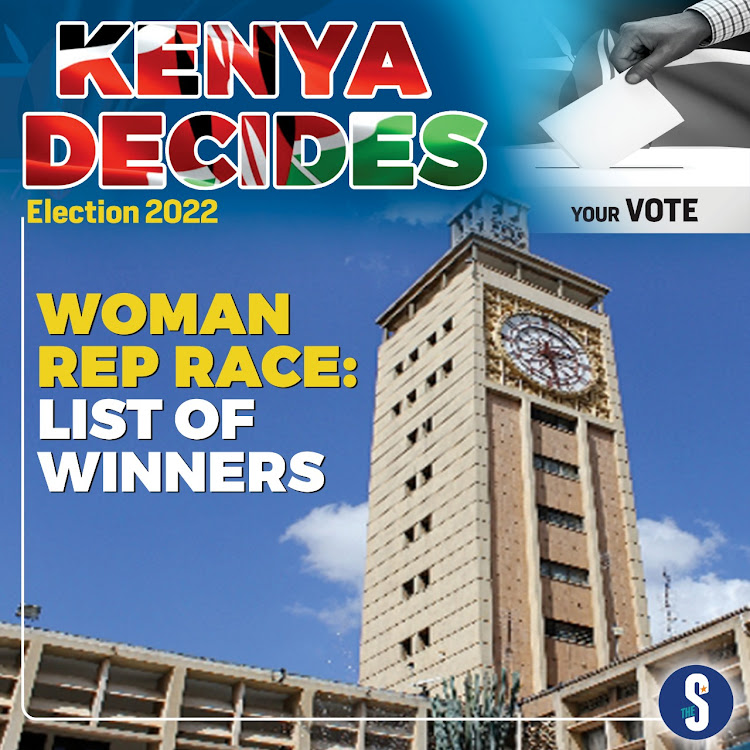 Kenyans on Tuesday, August 9, exercised their civic duty by voting for their preferred candidates from the presidency to members of the county assembly.

All 47 counties took part in choosing their next woman representatives.

The county woman representatives serve in the national assembly alongside the 290 members elected from the constituencies.

TSP party candidate Susan Ngugi has clinched the seat with 72749; Beatrice Kathomi of UDA came in second with 68396.

She garnered 405,492 votes as her counterpart, Mercy Nungari of the Tujibebe Wakenya party, who came in second with 212,115 votes.

Kakamega Woman Representative Elsie Muhanda has been overwhelmingly re-elected for a second term.

Muhanda, who ran on an ODM ticket, won with 300,426 votes against her closet contender, Naomi Shiyonga, who managed 67,351 votes. There were six other contenders.

Bonaya got 23,994 while the incumbent Rehema Jaldesa followed closely with 21,804.

Bonaya contested under the Jubilee ticket.

Gladys Shollei has retained her seat.

She won the race by a huge margin garnering 292,154 votes against her rival Dorcas Jebet of the ODM party who got 54,742 votes.

Shollei ran for the seat on a United Democratic Alliance party ticket.

Jane Kagiri won the seat in her second attempt after losing it in 2017 to the incumbent  Ms Catherine Waruguru.

In the third position was Purity Kendi an Independent candidate, who got 26,905 votes.

Liza Chelule of UDA has retained her woman representative seat after garnering 382,143 votes.

Her closest competitor, Agnes Njambi of the Jubilee Party, got 194,610 votes.

Beatrice Adagala was re-elected through the ANC party ticket.

Jubilee’s Jerusha Momanyi, who is the incumbent woman rep, was re-elected after she garnered 84,843, votes against Emily Nyagarama who got 72,434 votes.

Catherine Omanyo won the seat on an ODM party ticket.

Caroline Ngelechei who contested as an independent won the seat by receiving 104,928 votes.

Emmah Akinyi, 25, if Maendeleo Democratic party got some 7,447 to occupy position three.

Lydia Haika vied on a UDA party ticket and trounced her rival, the former woman representative Joyce Lay of Jubilee to earn a second term.

Gertrude Shuwe of DAP-K finished a distant third with 16,642 votes.

Fatuma Abdi Jehow of the Orange Democratic Movement (ODM) trounced Jubilee Party’s Fatuma Gedi after garnering 36,064 votes beating 11 other candidates who were battling it out for the seat.

Gedi had only served for one term in the woman representative position.

Nairobi woman representative Esther Passaris of the ODM Party has been re-elected to her position after getting 698,929 votes.

The winner was declared by Nairobi County Returning Officer Albert Gogo and issued the certificate to Passaris.

Some of the candidates retained their seats while others lost.
News
1 month ago