Some of the candidates retained their seats while others lost.

•All 47 counties took part in choosing their next senator.

•Some of the candidates retained their seats while others lost, as it is the norm with every election 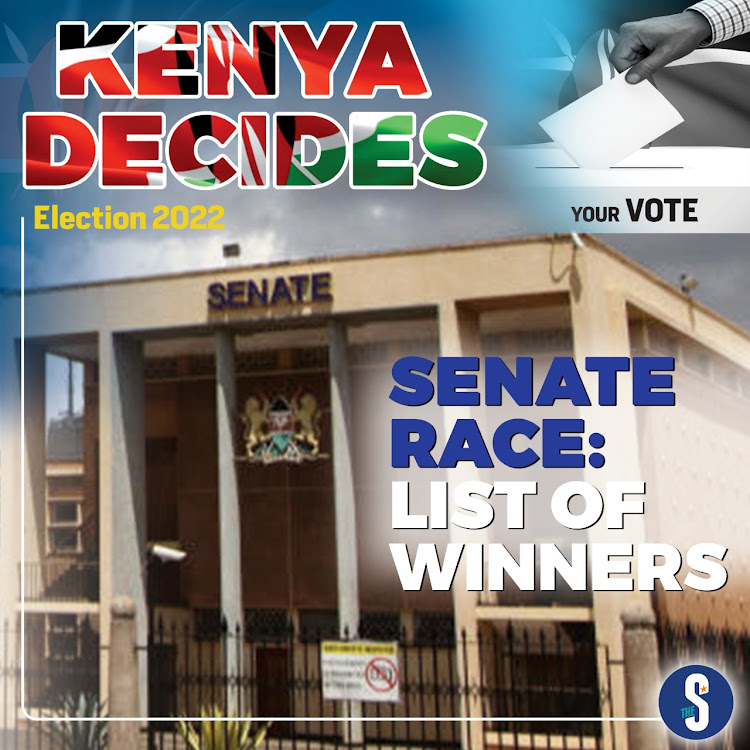 Kenyans on Tuesday, August 9, exercised their civic duty by voting for their preferred candidates from the presidency to members of the county assembly.

All 47 counties took part in choosing their next senator.

Some of the candidates retained their seats while others lost, as is the norm with every election

Moses Kajwang' of ODM has retained his seat after garnering 353,882 votes. His KANU opponent Thomas Ojanga got 18,690 votes.

ODM's Tom Ojienda has clinched the seat with a vote count of 413,121. Enos Kudi Okolo of Jubilee came in second with 15,575 votes.

UDA party candidate Allan Chesang has clinched the seat with a vote count of 123,793 votes.

UDA party candidate Jackson Mandago has clinched the seat with a vote count of 252,800 votes.

UDA party candidate Boni Khalwale has clinched the seat with a vote count of 247,860 votes.

Issa Boy of ODM retained his seat after garnering 52,772 votes. In second place was Antony Yama of UDA who got 41,762 votes.

Faki Mwinyihaji has retained his seat using an ODM ticket after getting 110,040 votes.

He defeated the Outgoing Governor Samuel Tunai who got 117,869 votes.

The outgoing governor Kivutha Kibwana, the leader of Muungano party got 59,034 votes.

Agnes Kavindu of Wiper Party won the race by a vote count of 155,883 against UDA's Urbanus Ngengele won got 65,603 votes.

The incumbent Senator Enock Wambua has retained his seat after bagging 191,317 votes.

The Wiper candidate floored Stephen Kilonzo of UDA, who got 49,064 votes.

George Maara of Jubilee came in second with 112,304 votes.

UDA's Bishop Margaret Wanjiru came second after she got 554, 091 votes.

Alexander Mundigi of the Democratic Party trounced his 11 opponents after garnering 81, 162 votes.

Githiomo was an Independent candidate after loosing the UDA nominations.

UDA Party Candidate Mohamed Chute was declared the winner in the  race after polling 41,760 votes.

He floored his UDA opponent Mose Nyambega who got 43,866 votes.

Kipchumba Murkomen successfully defended his seat after getting  141,091 votes.

The outgoing governor Alex Tolgos who was vying on a Jubilee ticket managed 20,648 votes.

Senator Steve Lelegwe has retained his seat with a vote count of 40,066 on a UDA ticket.

He trounced the ODM candidate Joseph Lepariyo who got 2,111 votes while Joshua Leparachao of DAP-K had 485 votes.

Abdulkadir Haji of Jubilee clinched the seat after polling 72,383 votes.

Kercho CEO Tabitha Karanja won the seat after getting 442,864 votes.

UDA's Aaron Cheruiyot has retained his seat after polling 292, 295 votes.

Joseph Githuku has won the seat with a Jubilee ticket.

Githuku will succeed Anuar Loitoptip who won the seat through a Jubilee ticket in 2017.

UDA's Abdulkadir Haji was re-elected. In 2017, he had won through a Jubilee Party ticket.

She was vying using a Jubilee ticket.