The city has 2.4 million registered voters.

•Most opinion polls conducted weeks to the election day had painted pretty much a similar picture. They put Raila's popularity at an average of 58 per cent while Ruto's at 39 per cent. 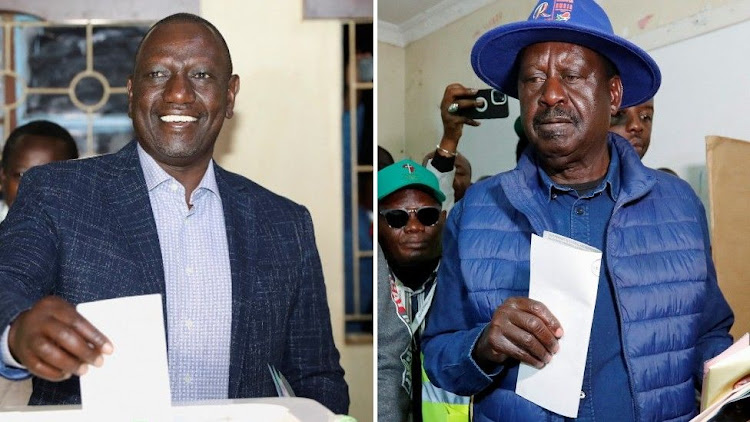 Azimio La Umoja leader Raila Odinga seems to have stamped his authority in the Nairobi city politics if the electoral results trickling in are anything to go by.

From the ballots that have been tallied so far, Raila’s Azimio party has amassed 58.72 per cent of the votes so far counted. Ruto’s UDA party has garnered 40.50 per cent.

The city has 2.4 million registered voters. Statistics about voter turnout in the city are yet to be determined.

Most opinion polls conducted weeks to the election day had painted pretty much a similar picture. They put Raila's popularity at an average of 58 per cent while Ruto's at 39 per cent.

The dominance of Raila over Ruto in city politics is a sharp departure from the two previous elections.

The Azimio supremo was in a neck and neck competition with president Uhuru Kenyatta.

The number of MP winners already declared by the electoral body IEBC also suggests that Raila has had a dominant showing in the city this electoral cycle.

Azimio affiliate Jubilee party has won Dagoretti South, Embakasi West, Roysambu, Kamukunji and is projected to be on the path to bagging the Starehe constituency.

The tallies for county seats that include governor, senator and Woman representative are yet to be declared.

But incumbent woman representative Esther Passaris is said to be favoured to retain her seat.

ODM secretary general Edwin Sifuna is also said to be right on his way to the Senate.

The possibility of Jubilee’s Polycarp Igathe to win is contested as current Nairobi senator Johson Sakaja is said to be favoured to win on a UDA ticket.

The results are as captured in Forms 34As.
News
1 month ago

He says results announced at the polling station are final.
News
1 month ago