He said the processes followed reflected the will of the people.

•He said security was professional and did not hinder people from exercising their mandate.

•Kikwete said IEBC successfully conducted elections by the use of technology. 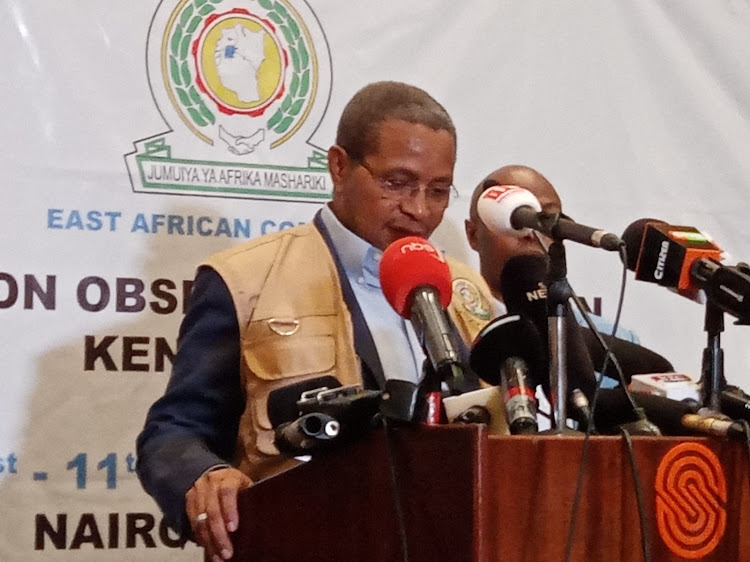 The EAC has announced that it is satisfied with the manner in which the polls were conducted.

EAC observer chair Jakaya Kikwete said the processes followed reflected the will of the people.

Kikwete said most polling stations opened on time. However, there is a need for IEBC to take corrective measures on those that opened late.

He said security was professional and did not hinder people from exercising their mandate.

Kikwete said the officials that conducted the elections did so professionally.

He lauded IEBC for engaging young people in the election process. He said women were also engaged, urging Kenya to ensure the two third gender rule is realized.

Kikwete said IEBC successfully conducted elections by the use of technology.

He said instances of failure of technology must be identified for corrective measures to be put in place.

Kikwete said there were agents for parties but in some instances, agents for the independent candidates were many, a move he said needs attention, especially on how party nominations were done.

Kikwete noted that party agents were however far from where voters were being counted.

"In future, there is need for party agents should be close to ascertain the authenticity of voters, " he said.

He urged those not satisfied with the results to seek answers from the country's court system.

Bobi Wine, Kizza in the country to monitor Tuesday's poll

IGAD had deployed 24 election observers in 10 counties.
News
3 months ago

IGAD starts training of 24 observers ahead of polls

The 2017 polls had over 5,000 election observers and international journalists.
News
3 months ago