•Wamae said losers of the election should accept the verdict and allow the country to move on peacefully.

•She expressed gratitude on how the electoral commission handled the situation after her principal George Wajakoyah was unable to vote because of Kiems kit failure. 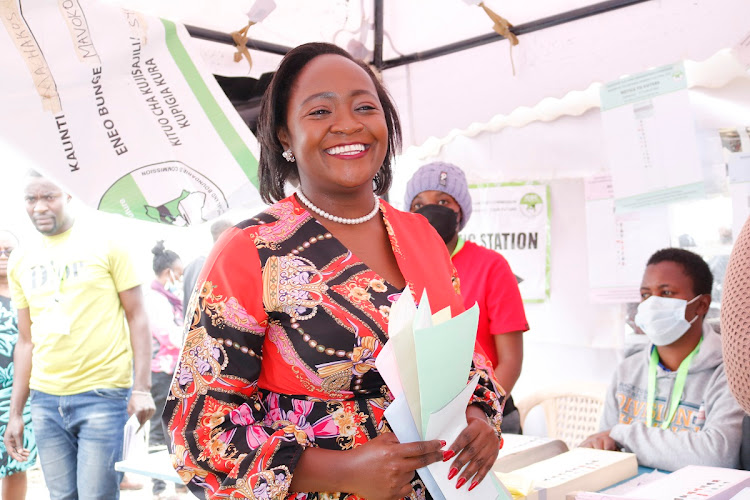 Roots Party Presidential running mate Justina Wamae says she is satisfied with how the Independent Electoral and Boundaries Commission conducted the 2022 general elections.

Wamae said losers of the election should accept the verdict and allow the country to move on peacefully.

She expressed gratitude on how the electoral commission handled the situation after her principal George Wajakoyah was unable to vote because of Kiems kit failure.

“I talked with my principal. He told me he had the challenge twice but the problem was later sorted out and he successfully casted his vote at the same polling station,” Wamae said.

Wamae addressed the press at Syokimau borehole polling station in Mavoko, Machakos County where she casted her vote at 1. 30 pm.

She said the electoral body wasn’t to blame since the problem was normal, a technical hitch that is expected to happen in any election.

“The hitch was out of technological breakdown, he is voting in the rural, not in Nairobi as I have just done. I have confidence in IEBC,” Wamae said.

“The ability to fix the problem shows that IEBC is well prepared and ready to sort out any challenge. I’m satisfied with the electoral authority,” Wamae said.

She thanked their supporters for standing with them during the voting exercise.

“I am happy that they have voted in numbers not only from Wajakoya’s home town, but across the country,” she said.

“This is a defining moment for the youth. Some youths have come out and voted me since I’m one of their own. I’m 35 years of age, this confirms that even the youth have a voice in leadership of this country,” Wamae said.

She called for peace after the general elections stating that ‘Kenya belongs to all of us’.

He expressed his dissatisfaction over the technical error.
News
1 month ago

He engaged briefly with the presiding officer before walking out.
News
1 month ago
Post a comment
WATCH: The latest videos from the Star
by GEORGE OWITI Correspondent - Machakos
News
10 August 2022 - 03:09
Read The E-Paper