• They were first cornered by residents before police officers were called to come for them. 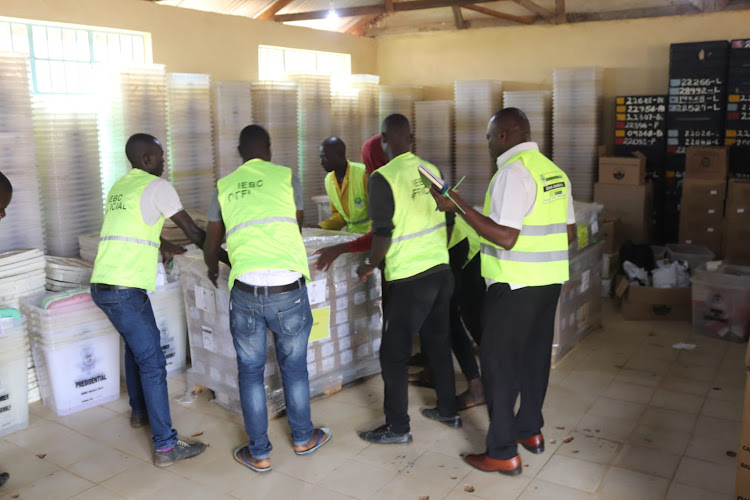 Police in Ndhiwa have arrested four IEBC officials over alleged plans to engage in electoral malpractice ahead of the Tuesday general election.

Ndhiwa police boss Paul Rioba said the four were arrested at a home in Riat village in Kanyikela ward before being taken to Ndhiwa police station.

They were first cornered by residents before police officers were called to arrest them.

Witnesses said concerned residents stormed the home and arrested the four as others escaped.

"Residents frog-matched the four suspects before they were handed over to police," a resident said.

The residents accused them of allegedly holding a meeting to plan how they will mark and stuff ballot papers in favour of certain candidates.

Rioba said the poll officials were interrogated and handed over to the Independent Electoral and Boundaries Commission.

"IEBC will take appropriate action against them," Rioba said.

According to the Elections Offences Act, any election official who colludes with any political party or candidate for purposes of giving an undue advantage to the political party or candidate commits an offence and is liable on conviction, to a fine not exceeding one million shillings or to imprisonment for a term not exceeding three years or to both.

"We're calling on the police to ensure those who escaped are arrested and charged. IEBC officials shouldn't promote election malpractice," Agwanda said.

He noted that such activities are likely to undermine the credibility of Tuesday's general election in the constituency.

Interface Community Help Desk leader Oloo Gor condemned the incident saying the suspects should be asked to expose the people behind their action.

"Any act of partisanship shouldn't be allowed in the election especially from IEBC officials. It's against the IEBC Code of Conduct,"Gor said.

Administrator says those found risk heavy penalties, including being barred from participating in future elections
Counties
1 month ago