NOT TRUE: Reports that Wilson Sossion has been appointed TSC CEO are false

Sossion has also denied reports of being appointed TSC CEO

•Sossion’s alleged appointment went viral on social media with a section of Kenyans like Dennis Nyambane taking to their respective social media to post about it.

Reports that the former Kenya National Union of Teachers (Knut) Secretary-General Wilson Sossion has been appointed as the Teachers Service Commission (TSC) CEO are fake.

Sossion’s alleged appointment went viral on social media with a section of Kenyans like Dennis Nyambane taking to their respective social media to post about it. 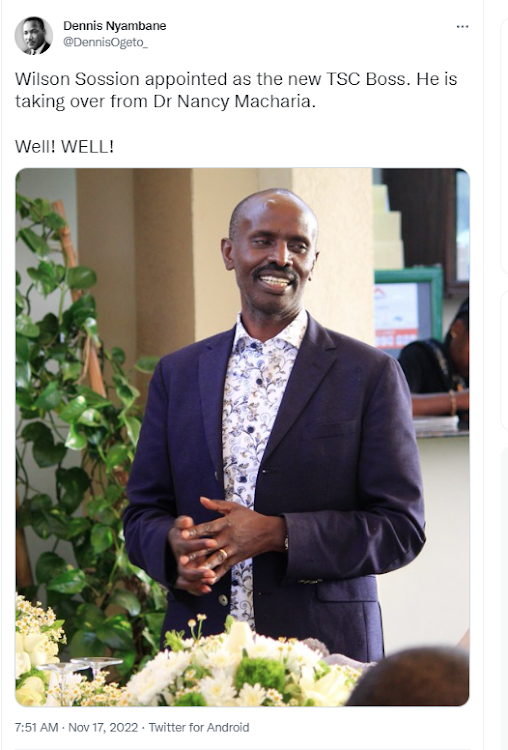 “Wilson Sossion was appointed as the new TSC Boss. He is taking over from Dr Nancy Macharia. Well! Well!” Nyambane tweeted.

The Fact-Checker has debunked the claims and can now report that they are fake.

When contacted for a response, TSC Communication Official Amunga Peter said the reports are not true.

“TSC CEO is appointed through competitive advertising when a vacancy emerges. As of now, there is no vacancy at the commission. Definitely, the reports are not only misleading but fake,” Amunga told the Fact-Checker.

Sossion has also denied reports of being appointed TSC CEO, a report by KBC indicates.

“My attention has been drawn to social media fake reporting that I have been appointed Teachers Service Commission CEO. This is not true,” Sossion was quoted by KBC.

Also, the current TSC CEO Nancy Macharia’s five-year tenure is yet to lapse.

Macharia’s tenure at TSC was extended in 2020 when the board renewed her term for another five years, meaning she will serve until June 2025.

She was first appointed to the position in 2015.