FAKE: Reports that Winnie Odinga has been nominated to EALA not true

ODM party has denied nominating anyone to EALA.

•The scion to ODM party leader Raila Odinga become part of top Twitter trends on Wednesday with a section of those tweeting about her commenting on her alleged appointment to EALA.

Social media reports indicating that Winnie Odinga has been nominated by the ODM party to be a Member of Parliament for the East African Legislative Assembly are FAlSE.

The scion to ODM party leader Raila Odinga become part of top Twitter trends on Wednesday with a section of those tweeting about her commenting on her alleged appointment to EALA. 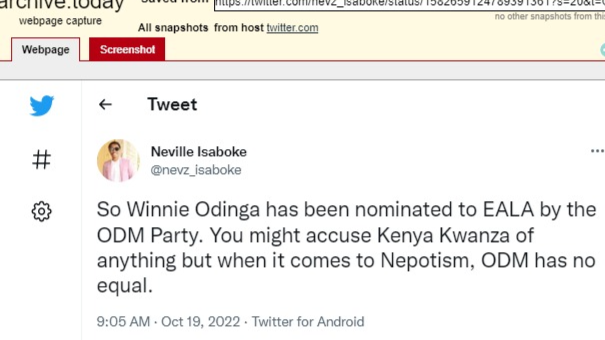 “So Winnie Odinga has been nominated to EALA by the ODM Party. You might accuse Kenya Kwanza of anything but when it comes to Nepotism, ODM has no equal,” Nevile Isaboke tweeted.

Another tweep by the name Abuga Makori tweeted: “Congratulations Winnie Odinga and Hon. Timothy Bosire for your nomination to EALA. I know you have what it takes to shape East Africa. The ODM family wishes you the very best”. 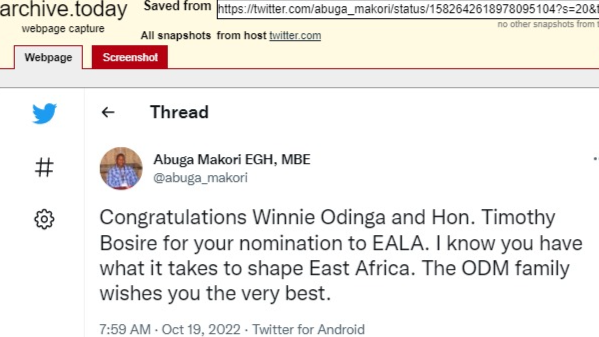 Fact Checker has debunked the reports and established that they are not true.

The ODM Party has issued a statement, to clarify the reports, saying it is yet to settle on nominees who will represent the party at EALA.

“To all party members of ODM, Azimio la Umoja Coalition & the general public, this is to inform you that the party has not made any communication regarding her nominees to EALA. Parliament has set the pace for the process & we shall in due course make the official communication,” the ODM party tweeted Wednesday evening. 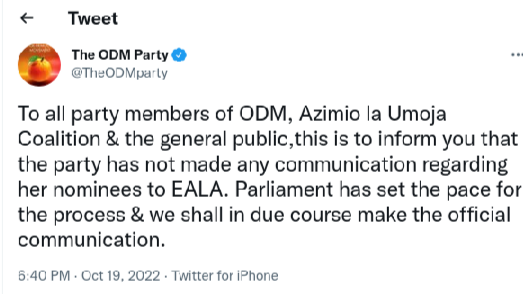 Winnie Odinga also released a statement on Wednesday stating that she did not apply to be nominated to EALA.

She at the same time said no official communication has been made by the party regarding the same.

“I have not applied for Eala nor has any official comms come from the party,” she tweeted.