FALSE: Image of two arrested with human skulls not in Kiambu, Kenya

The two were arrested bones in Adamawa State in Nigeria.

•A search of the image via Google Lens shows the arrest did not happen in Kenya but in Adamawa State. This is a state in the North-East geopolitical zone of Nigeria.

It is not true that the image of two people reportedly arrested with human bones happened in Kenya.

A Kenyan tweep going by the name Madoka M Kibet HSC took to his Twitter handle and claimed that two people were arrested with human bones in Kiambu, Kenya.

“Forget about the KIAMBU saga, these two were Arrested with human bones. They said they use them to make bracelets. Hii Kenya mimi sielewi tena,” he tweeted. 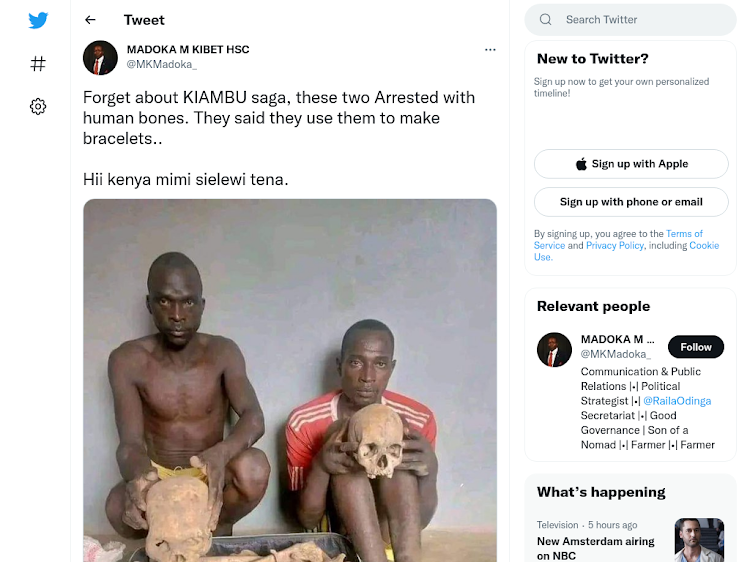 Fact-Checker has, however, debunked the image and found that the two were not arrested in Kiambu as claimed.

A search of the image via Google Lens shows the arrest did not happen in Kenya but in Adamawa State. This is a state in the North-East geopolitical zone of Nigeria.

A report by a Nigerian blog  Linda Ikeji was among the first site to report about the arrest.

In its report titled Two men arrested with human skull in Adamawa (photos), the blog used the image of the two and identified them as Raji Silver and Nodji Kodji.

The report indicated that the two were arrested for being in possession of two human skulls and several bones.