UDA SG Veronica Maina has flagged it as fake.

•The letter, widely shared on social media, had UDA party symbols and the alleged signature of  the outfit’s secretary general Veronica Maina.

•It also had an alleged stamp of the UDA party with September 3, being the date it was authored. 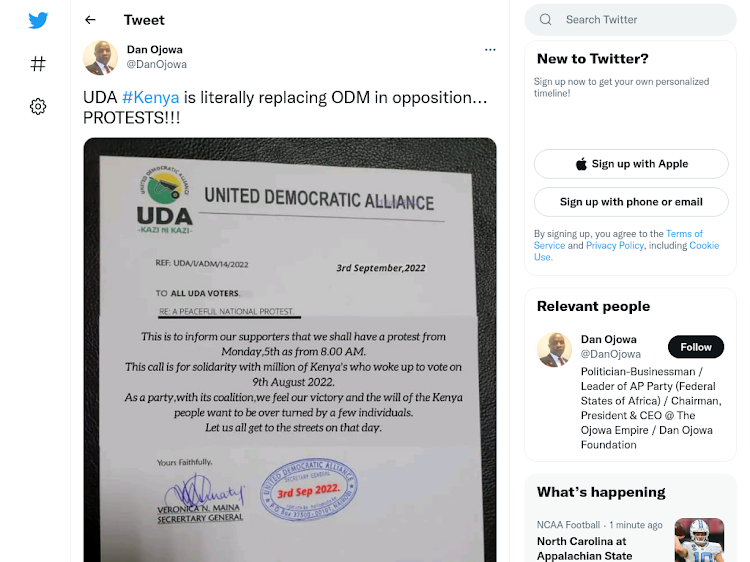 A letter going viral on social media asking United Democratic Alliance (UDA) Party supporters to prepare for protests from Monday, 5 September 2022, at 8am is FAKE.

The letter, widely shared on social media, had UDA party symbols and an alleged signature of  the outfit’s secretary general Veronica Maina.

It also had an alleged stamp of the UDA Party and was allegedly authored on September 3, 2022.

“This is to inform  our supporters that we shall have a protest from Monday 5th as from 8:00Am. This call is for solidarity with millions of Kenyans who woke up to vote on August 9, 2022,” the fake letter read in part.

“As a party, with its coalition, we feel our victory and the will of the Kenya people want to be overturned by a few individuals . Let us all get to the streets on that day.”

The Factchecker has debunked the letter and established that it is fake.

UDA secretary general Veronica Maina, who was deemed as the author, has denied such plans.

While flagging the letter as fake, she took to social media and said: “Desperation by the masters of forgeries.” 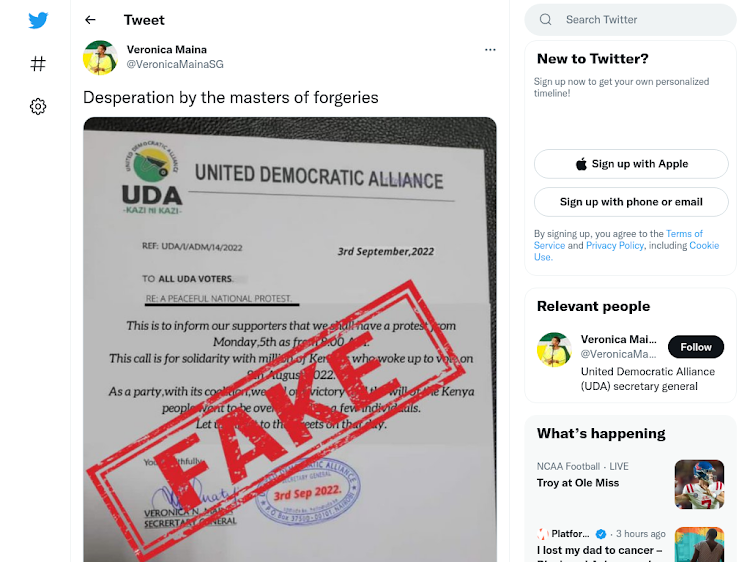 Azimio la Umoja Presidential candidate Raila Odinga was among the seven petitioners who challenged the declaration of William Ruto as the president-elect.

The hearing of the petition was concluded on Friday.

The CJ has not said or posted such a message on his official media handles.
News
1 month ago

FAKE: Sakaja has not banned mkokoteni and handcarts in CBD

Sakaja was sworn in as Nairobi Governor on Thursday, August 25.
News
1 month ago
Post a comment
WATCH: The latest videos from the Star
by BOSCO MARITA Digital Sub-Editor
Fact Checker
04 September 2022 - 10:14
Read The E-Paper