It's fake! Deputy CJ Philomena Mwilu is not on Twitter

The fake account had 299 followers when it was flagged by Judiciary.

• The fake account indicates the the CJ allegedly joined the popular social media app in March 2022 and has 299 followers. 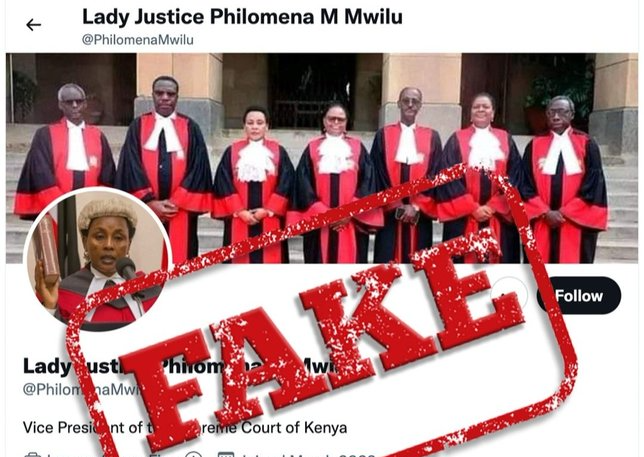 The Judiciary has dismissed as fake a Twitter handle attributed to Deputy Chief Justice Philomena Mwilu.

The cloned account indicates the CJ allegedly joined the popular social media app in March 2022 and has 299 followers.

Mwilu became the third judicial officer to be targeted by peddlers of fake news during the course of the presidential petition hearing.

On August 31, a Facebook post attributed to Chief Justice David Maraga on the ability of the Supreme court to declare the winner of the August 9, elections were flagged as fake.

The fake post also alleged that the former CJ was envisioning an arrest of Chebukati apparently because of an election irregularity.

The communications advisor in the office of the Chief Justice, Michael Mumo, said Justice Lenaola does not own a Twitter account.

"Justice Isaac Lenaola is not on Twitter," Mumo said.

The CJ has not said or posted such a message on his official media handles.
News
1 month ago