Ngunjiri has not posted such a message shared on the parody account.

•By the time of going to press, the original account, @ngunjiriwambugu, had 177.1k followers.

A tweet from an account bearing the image and name of outgoing Nyeri Town MP Ngunjiri Wambugu is fake.

The fake tweet which has attracted massive engagements on social media indicated that the outgoing MP had weighed in on defections that have plagued the Azimio One Kenya Alliance. 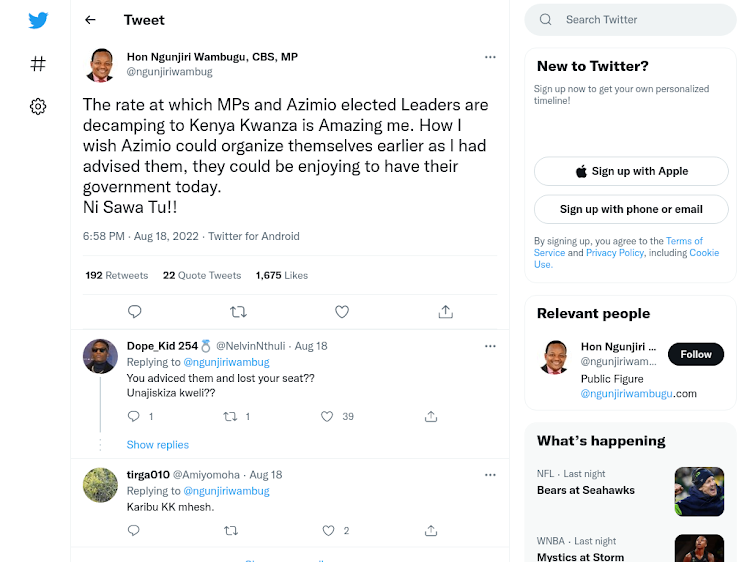 "The rate at which MPs and Azimio elected Leaders are decamping to Kenya Kwanza is Amazing to me. How I wish Azimio could organize themselves earlier as I had advised them, they could be enjoying having their government today. Ni Sawa Tu!!" the fake tweet read.

By the time of going to press, the original account, @ngunjiriwambugu, had 177.1k followers.

A scan through the original account shows that Ngunjiri has not posted such a message shared on the parody account.

The MP has warned Kenyans from falling prey to tweets made in his name. 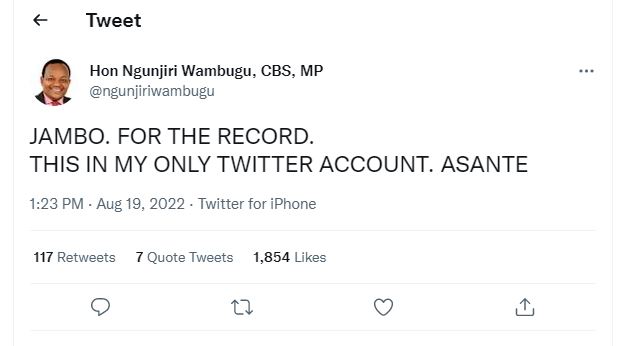 Ngunjiri is one of the few Mt Kenya MPs who supported Azimio presidential candidate Raila Odinga for the presidency.

He served the Nyeri Town constituency from 2017 to 2022 when he was kicked out by a UDA candidate Duncan Mathenge in the August 9 elections.

The constituency is in Nyeri county which overwhelmingly voted for President-elect William Ruto.

FAKE: Ex-MP Mishra has not withdrawn any scholarship

The message attributed to Bishop Oginde is misleading.
News
1 month ago

FALSE: Schools are not opening on August 22

The disruptions on school opening day was due to the August 9 general election.
News
1 month ago