We checked some claims they made and established whether they are factual.

•Roots party presidential candidate Waihiga Mwaure was to debate Roots candidate George Wajackoyah but the latter failed to turn up. 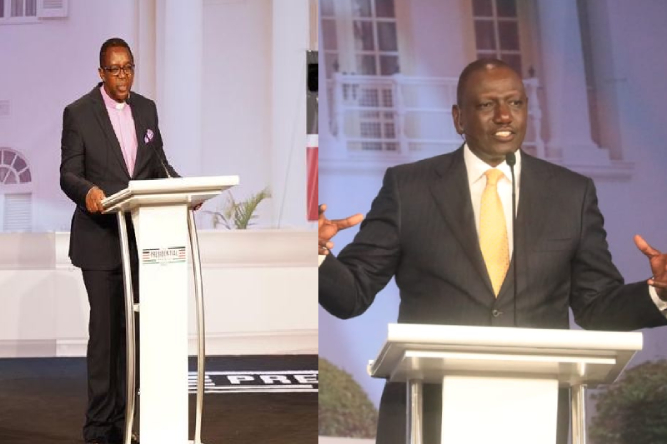 In the last instalment of the presidential debates, Deputy President William Ruto and lawyer David Mwaure spoke to the country after their opponents failed to show up.

We checked some claims they made and also looked into what the expert panellists had to say.

“We have 15 million Kenyans who today are blacklisted in the CRB .” - William Ruto

This claim has been fact-checked previously.

Currently, three are licensed to operate in Kenya. We spoke to the Managing Director of Metropol, Mr Sam Omukoko, who is also vying for the Kakamega gubernatorial seat under the Maendeleo Democratic Party.

Omukoko previously told us that credit reference bureaus in Kenya have a total of 14 million accounts listed, not blacklisted. Not all the 14 million are defaulters. We reached out to the Central Bank of Kenya and we will add their response to the report.

“In the current system where all banks and credit facilities share information, we have information of loans given out. Yes, there are 14 million accounts in CRB. However, there are about 3 million Kenyans registered as defaulters.”

There are 15 taxes on fuel - William Ruto

Fuel prices in Kenya are regulated by the Energy and Petroleum Regulatory Authority. On 14 July 2022, the authority released the schedule of maximum fuel prices for the month-long period lasting from 15 July 2022 to 14 August 2022. The fuels covered include super petrol, diesel and kerosene.

In addition, the authority also provided a breakdown of the fuel prices in Nairobi. For example, a litre of super petrol in Nairobi is expected to retail at KSh159.12 per litre. Taxes are expected to take up KSh64.06 of this number, which is 40 per cent of the retail price.

The taxes making up this amount are as follows: 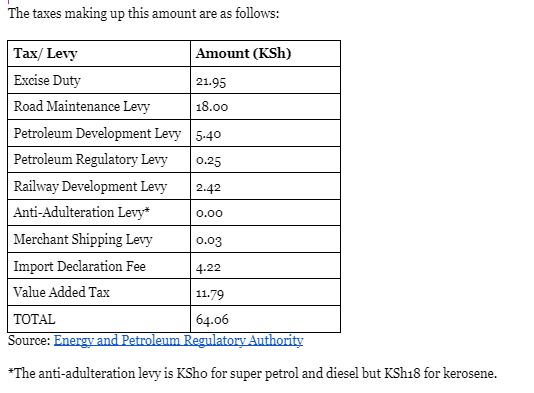 The official breakdown by the Energy and Petroleum Regulatory Authority shows there are nine taxes, lower than Ruto’s estimate of 15.

Historical numbers for Kenya’s public debt can be found in the National Treasury, a compilation of Economic Surveys and the Central Bank of Kenya. Deputy President Ruto was referring to the amounts of debt borrowed during the first and second terms of the Jubilee government, respectively.

We took the first term as lasting from March 2013 to August 2017 and the second term from that balance to May 2022, using monthly public debt figures provided by the Central Bank of Kenya as of 27 July 2022.

Based on the debt balances at these dates, the Jubilee government borrowed KSh 2.7 trillion in the first term and KSh4.1 trillion in the second term, which is close to Ruto’s figures of KSh 2.2 trillion and KSh 4.2 trillion.

Although the numbers Ruto quoted are close to published figures, it is not clear that the term “handshake brothers'' refers specifically to debt contracted after the handshake of March 2018, or what role Raila Odinga would have played in managing the nation’s debt.

Ruto responds to having 'appetite' for land

Uhuru drums up support for Raila, tells Ruto to relax